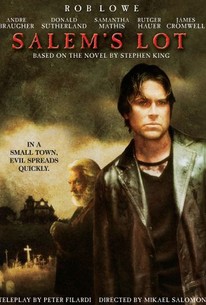 In this TV adaptation of the Stephen King novel, a journalist with traumatic memories of his haunted childhood returns to find his hometown being infiltrated by vampires. As a boy in Jerusalem's Lot, ME, Ben Mears (Rob Lowe) took a dare and broke into a local mansion called the Marsten House. There, he had the misfortune of discovering the corpses resulting from a scandalous murder/suicide. Decades later, he returns to find that a mysterious antiques dealer (Donald Sutherland) and his unseen business partner (Rutger Hauer) have moved into the Marsten House. Soon, townspeople begin disappearing and dying, only to return, floating outside the windows of their loved ones and begging to be let in. Only Ben and a few newfound allies suspect the awful truth: that something unholy has overtaken their town...something with links to the sinister mansion of Ben's nightmares. Originally broadcast June 20 and 21, 2004, on the TNT cable network, Salem's Lot was scripted by Peter Filardi, who previously penned The Craft and Flatliners. Shot on-location in Australia, this is the second television adaptation of Salem's Lot, and it follows Tobe Hooper's 1979 version. Hauer and Sutherland are old vampire buddies, having previously co-starred in the original Buffy the Vampire Slayer film.

The presentation of the story just doesn't seem fresh. The familiarity may appeal to King fans, but those expecting an innovative take on a classic vampire tale will be disappointed.

The first five minutes of "Salem's Lot" are great. Well, four minutes. And then Lowe's voice-over kicks in, which essentially starts the poison drip. It's a lot of King-speak, which is annoying and so formulaic it ought to be patented (and might be).

In the lavish visuals, acrobatic vampires prowl ceilings and expire with ferocious flourishes... Those images should satisfy moviegoers who can't get enough visual magic at the multiplex. But great acting serves the show better in the long run.

It develops psychological complexity and a fullness of character that is usually in King's books but rarely makes the transition to screen.

TNT's four-hour miniseries boasts fine performances, exceptional photography and all the other bells and whistles that mark a great show.

The script of ''Salem's Lot'' does justice to the mini-series's effects.

Even though I didn't approach it with a genre fan's enthusiasm, I will allow that this remake offers its share of scares.

My advice: If you have four hours to spare, spend it reading the book.

It's just not particularly scary. Which is a problem for what's supposed to be a horror film

A horrible remake to a classic horror film...

Better than the original. You know what? You'll actually want to sit through this one

A small town in New England is visited by slow dawning horror just as some new people move in: could there be a connection? This handles that slow burn pretty well although the ending could have used a little more pepper. The stars do enough, but Sutherland is exemplary conveying "I'm gonna get you!" menace played nonchalantly. Wish there was more of him in this.

I love the 1979 original it was so scary for a TV miniseries and i was only 10 when first saw it.So going into this 2004 remake or re image what ever you call it i was abit unsure about it.Well what a surprise it was excellent.The story is abit more flush out and a few more players to the mix.Rob Lowe was very good in the David soul part. Wouldn't say its as scary as the 1979 version but there is a few nice jumps along the way.Only real disappointment was that they used Rutgers hauer as the main vampire Barlow who was not really that scary as the 1979 version of Barlow. Don't be afraid of the 3 hrs. running time as it seem to pass quite quickly.

not bad for a tv miniseries

Judging it on its own, and not comparing it to the book or the 1979 TV mini, this really isn't a bad flick -- up to the last ten minutes or so. Then it kinda blows. But for a 3hr movie, that's not a bad ratio.