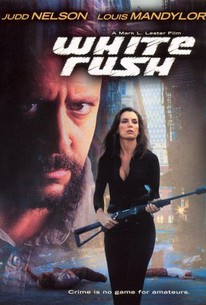 A drug deal gone awry leads to harrowing consequences for a group of campers in this thriller from Firestarter director Mark L. Lester. When they stumble across the aftermath of a botched, deep-woods drug deal, Chick (Louis Mandylor) convinces his nature-bound friends to pocket the cash and sell the cocaine that was left behind by the would-be dealers. Unaware that dealer Brian Nathanson (Judd Nelson) has survived the ordeal and witnessed the campers' indiscretion, he vows to track them down and retrieve the missing contraband. Meanwhile, the powerful drug lord behind the deal has hired a beautiful but lethal assassin to track down the drugs and the money at any cost -- and she's more than happy to fulfill her mission and take down anyone who gets in her way.

Will Caceres
as Mexican No. 1
View All

There are no critic reviews yet for White Rush. Keep checking Rotten Tomatoes for updates!

There are no featured audience reviews yet. Click the link below to see what others say about White Rush!