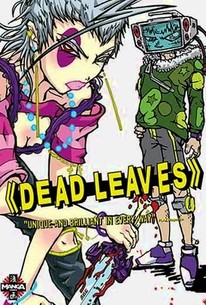 Powerhouse anime stalwarts Manga Entertainment and Production I.G (who brought audiences the popular Blood: The Last Vampire) once again team to take Japanese animation lovers on a wild ride with this breakneck futuristic actioner that will have even the most jaded viewers lifting their jaws from floor in disbelief. When Pandy and Retro awaken naked with no memory of the past, they quickly embark on a wild and violent crime spree before being captured by authorities and imprisoned in the infamous Dead Leaves lunar penitentiary. When they discover that the prison also houses a top-secret cloning facility, the deadly duo leads the inmates and the mutated victims of the government's cruel genetic experiments on a bloody uprising that will shake Dead Leaves to its very core. ~ Jason Buchanan, Rovi

With very little of an actual plot and yet a series of countless things and events that seem to happen so quickly one after another in such a short running time, this insanely frenetic anime full of shapes and colors proves to be a lot of fun to be at least worth the curiosity.

Anime about a man with a television for a head and a woman with mismatched eyes who wake up with amnesia, are imprisoned on the moon, have a baby and kill lots of things. It's hyperactively paced with animation styles that change every few seconds, and it has almost no comprehensible plot; watching it is like putting an ultraviolet manga into a blender and trying to read it as the pieces swirl around. The artwork is great but the whole experience is kind of tiring.

Downright fucking detestable. This is what gives anime a bad name. The animation may be "fluid", but it's ugly and unpleasant to look at. This is like getting shit on through animation.

This was like an insane bastard child between Aeon Flux, Fooly Cooly, Tank Girl, and Invader Zim. The action was non stop, and the visuals were complete eye candy. Totally crazy from start to finish, and deserves to be watched even if just for its uniqueness. Stunning to behold and funny to boot. I really enjoyed watching it.