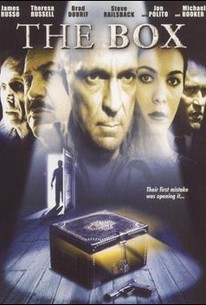 Richard Pepin's The Box stars James Russo as Frank Miller, an ex-convict attempting to live on the right side of the law. He works at a coffee shop in Los Angeles and is starting a relationship with his co-worker Marie Evans (Theresa Russell), who has attempted to begin life over after making a living as a prostitute. Sadly, there are people from their past that make their new life much more difficult than they would like.

Lee Weaver
as Joe
View All

Critic Reviews for The Box

There are no critic reviews yet for The Box. Keep checking Rotten Tomatoes for updates!

Audience Reviews for The Box

There are no featured audience reviews yet. Click the link below to see what others say about The Box!