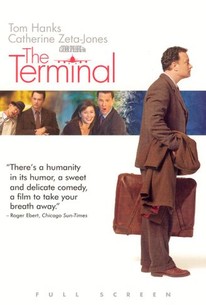 Critics Consensus: The Terminal transcends its flaws through the sheer virtue of its crowd-pleasing message and a typically solid star turn from Tom Hanks.

Critics Consensus: The Terminal transcends its flaws through the sheer virtue of its crowd-pleasing message and a typically solid star turn from Tom Hanks.

Critic Consensus: The Terminal transcends its flaws through the sheer virtue of its crowd-pleasing message and a typically solid star turn from Tom Hanks.

Viktor Navorski is a visitor to New York from Eastern Europe. His homeland erupts in a fiery coup, while he is in the air en route to America. Stranded at Kennedy Airport with a passport from nowhere, he is unauthorized to actually enter the United States and must improvise his days and nights in the terminal's international transit lounge, until the war at home is over. As the weeks and months stretch on, Viktor finds the compressed universe of the terminal to be a richly complex world of absurdity, generosity, ambition, amusement, status, serendipity--and even romance with a beautiful flight attendant named Amelia. But he has long worn out his welcome with airport official Frank Dixon, who considers Viktor a bureaucratic glitch--a problem he cannot control but wants desperately to erase.

Susan Slome
as Woman With Cart

Eddie Santiago
as Man on Phone

Benny Golson
as Himself

News & Interviews for The Terminal

View All The Terminal News

Critic Reviews for The Terminal

So satisfied with its feel-good status, it seems oblivious to the bad casting decisions

Hanks is a likeable actor but rarely a subtle one. Viktor is another cutesy emotional heart-tugger in the Forrest Gump mould, all galumphing slapstick.

It's an odd fable: Viktor is the mysterious visitor who shows us what the American Dream is all about-in the movie's terms, compassion for others -- without ever wanting to become an American himself.

Even in the desolation of an airport lounge at midnight, Viktor is too pure, we realize, to entertain the ghost of a dirty thought.

A feel-good film of such originality and sweetness in a summer of otherwise derivative sequels and remakes that it practically qualifies for miracle status.

The concept was there; the production abilities were there. It's the execution that fell apart.

Spielberg's visual translation of the script is exposed as a soulless set of scenes without personality that, frankly, could have been shot by any filmmaker with the same result. [Full Review in Spanish]

A jaunty and charming comedy .

Spielberg turns the sublime into the banal, at times taking it to the verge of ridiculous.

The Terminal manages to amuse, entertain, and inspire.

Lovely and well worth sharing with your family.

Audience Reviews for The Terminal

A sweet, heartwarming movie nothing more nothing less.

The Terminal is a completely charming look at one foreign man's unfortunate situation, stuck in an airport without a country. It's a little unbelievable but a good setting nonetheless for this comedic fish-out-of-water slice of life. Tom Hanks plays Viktor so effortlessly; the character reminds me of Andy Kaufman's "foreign man, "but Viktor's more believable. Catherine Zeta-Jones is gorgeous as always but more vulnerable here. I fell in love with her. The whole supporting cast is good; I liked the unexpected moments best, like the Indian janitor juggling during Viktor and Amelia's date. This Spielberg-directed picture may not be Philadelphia or Schindler's List, but I enjoyed it much more than most romantic comedies. It's the sweetest story I've seen in some time, though I do wish for a better ending for Amelia (Jones). The moral is something like: Some things are worth waiting for. It's a little sappy melodramatic, but you'll feel good after anyway.

a good drama film with a good cast. The film is good, and the cast definitely make it worth watching.

A feel-good comedy that is very different. I highly recommend watching it!