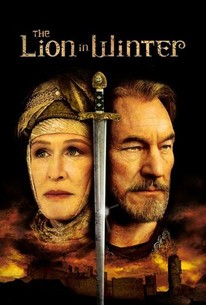 The Lion in Winter Photos

An elderly king must come to terms with his past as he plots his nation's future in this historical drama. In 1183, aging monarch King Henry II (Patrick Stewart) decides it is time to pick an heir to his throne, and he must choose one of his three sons -- John (Rafe Spall), Geoffrey (John Light), or Richard (Andrew Howard) -- to rule the British empire. Henry wants to announce his successor at a Christmas gathering of his court a few weeks hence, and in time for the event, he has decided to free his headstrong wife, Eleanor of Aquitaine (Glenn Close), who has been held in captivity for attempting to overthrow her husband's rule and expressing her displeasure with his mistress, Alais (Yuliya Vysotskaya). As Henry and Eleanor become re-acquainted, they are reminded of the love they share as well as the strife that drives them apart, and while Henry finds himself favoring his youngest son, John, for his post, Eleanor makes a strong case for her first-born, Richard, with Geoffrey attempting to consolidate influence in a bid for power. However, as the king looks back at his long past and short future, he comes to the sad realization that none of his sons are truly fit to rule. James Goldman wrote the screenplay for this, the second screen adaptation of his award-winning play, which finally came to fruition 5 years after Goldman's death. Peter O'Toole and Katharine Hepburn starred in the Oscar-winning 1968 version.

Glenn Close
as Eleanor Of Aquitaine

Andrew Howard
as Richard the Lionheart

Julia Vysotsky
as Alais
View All

News & Interviews for The Lion in Winter

View All The Lion in Winter News

Critic Reviews for The Lion in Winter

Showtime's version starts out as if intending such insouciance, but the soufflé soon falls to solemn pancake dough.

Audience Reviews for The Lion in Winter

Excellent version of the classic although not quite up to the unbeatable Katharine Hepburn/Peter O'Toole masterpiece.

King Henry II invites his estranged wife and three children to celebrate Christmas with his mistress, and the three sons vie for the throne. This remake is high family drama, and Patrick Stewart and Glenn Close bring energy to their roles. But there's not a lot that's particularly deep about the performances or the film as a whole. In fact, afterward I struggled to figure out what the film was saying. It's hard to reduce such a classic story to mere melodrama, but I fear that's all I saw. Overall, it's fun to watch, but the film's backbone is hard to pin down.

Glenn Close and Patrick Stewart are really great in the made for TV version of the Lion in Winter.

The Lion in Winter Quotes