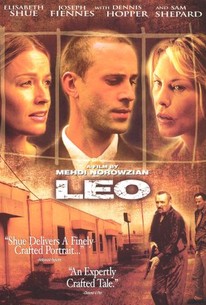 The feature-length debut of Mehdi Norowzian, Leo combines two different story lines, but does not reveal their connection until the end of the film. Stephen (Joseph Fiennes) gets a job at a diner run by Vic (Sam Shepard) after serving a 15-year jail term for murder, during which he spent a chunk of time writing. Mary Bloom (Elisabeth Shue) believes her professor husband has been cheating on her, and engages in sex with a house painter in order to get some revenge. After finding out her beliefs were false, Mary's husband and daughter die in a car accident. The pregnant Mary gives birth and names the boy Leopold after a fictional character in a novel she once read. Leo was screened at the Toronto Film Festival.

Gil Johnson
as Gil
View All

A well-written drama of psychological depth but diminishing returns.

The plot simmers along nicely, dipping and weaving between the two storylines with grace and style.

it will have even art house regulars rolling their eyes.

An overheated pot-boiler that plays like ersatz William Faulkner.

There are no featured audience reviews yet. Click the link below to see what others say about Leo!