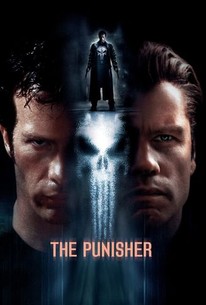 Frank Castle is a man who has seen too much death in his life, first as a Delta Force Op and later as an FBI special agent. He has managed to beat considerable odds, and is finally moving out of the field and into a normal life with him wife, Maria, and young son, Will. However, on his final assignment, the operation spins out of control and a young man, Bobby Saint, is inadvertently killed. This places the FBI on the wrong side of Tampa businessman Howard Saint, his wife Livia, and their underworld ties. Inflamed by the death of their son, the Saints are on a mission of blood vengeance. Frank's worst nightmare comes true when Howard Saint and his lieutenants unleash hell at the Castle family reunion. But Castle, to his everlasting torment, survives. Now, Frank Castle--the Punisher--views the world as one darkened by war, crime, cruelty, and injustice. He has no superpowers to battle the evil he sees, only his fierce intelligence, his years of combat experience and, above all, his iron determination to avenge those wronged by society's villains.

Will Patton
as Quentin Glass

Kevin Nash
as The Russian

Marcus Johns
as Will Castle

Jim Meskimen
as Accountant No.1

Jack Swanson
as Accountant No.2

Alan Lilly
as Accountant No.3

News & Interviews for The Punisher

View All The Punisher News

Critic Reviews for The Punisher

There's something to be said for letting a comic book adaptation operate at the level of a comic book, dispensing cheap laughs and ice-cold sadism.

A comicbook action movie with an unpleasant edge.

The Punisher is mildly entertaining, for all the wrong reasons

There isn't a moment in The Punisher that isn't borrowed or stolen from another movie.

Mismanages its greatest asset: an unusual embarrassment of camp riches.

Cliched, at times cheesy, and even campy due to the over serious earnestness of Hensleigh's direction, this is one punishment that will make you laugh and cry at the same - but for all the wrong reasons.

According to IFC, "The Castle family compound in PR was actually two public bathroom structures on a public beach in Tampa, FL that the production spruced up..."

good fun to watch the bad guys drop like flies

Despite some admittedly strong moments it's certainly nothing special and barely above ordinary.

Audience Reviews for The Punisher

This marks the second adaptation of the Punisher to the big screen, and it is a marked improvement over the 1989 effort. This one is a little more faithful to the source material, but the basic story remains the same. Frank Castle is a highly trained agent with all kinds of military and intelligence experience who, after his family is slaughtered, goes on a massive quest for vengeance that (in the comics at least) turns into a broad war on crime. Even though this film gets a lot right, mostly by having a strong cast, some impressively executed and thrilling action scenes, and some great production values, it needs some work when it comes to having a strong story and script. Some of the acting is also rather lackluster, but thankfully Tom Jane pulls off a good turn as Frank Castle. It also makes me happy that he underwent a lot of weapons and techniques training, as it shows during the action scenes. The film does have some good character building moments and quieter scenes, which I liked, but at the same time, it's also rather light when it comes to have depth or anything really all that meaning. The film also does good at showing the tactician side to the character of The Punisher, but doesn't have a good balance with it and his brutal side, leaving the most cringeworthy stuff up to the villains. This is a well made and entertaining film overall though, and, while it does have its faults, I think it's a pretty worthy piece of work, a fact greatly helped by a strong lead, good music, decent cinematography, and solid action. Some of the lighter moments provide some needed levity, but in a couple of instances, I think they could have toned it down, as some of the less serious moments fall flat and seem a bit silly. In the end though, I still dig this one and think you should check it out.

First reboot for the franchise since the underrated Lundgren flick. Admittedly Lundgren had the physique for the role but wasn't a naturally dark haired man, so this time they chose...a naturally blonde haired guy??. The plot was based around a few Punisher story lines from the comic book world and is an origins plot line. So we start off by seeing 'Castle' as a regular guy and top undercover cop, we get all the family life guff and this does actually take up quite a bit of the film early on. At one point it does get a bit dull and I started to yearn for some action. The plot is also more of the Punisher fighting one group of bad guys, he's not a vigilante killing lots of bad guys, he fighting one particular group. At first I didn't like that but the finale clears it up so. When the action does hit so do the problems. First off the 'killing' of Castle, how the hell did the bad guys mess that up?!. Normally when someone is gonna get whacked they are shot in the head point blank, simple, but in this film its just stupid. The bad guys have Castle but shoot him in the chest?? not even in the heart but the other side! eh? surely you'd shoot him in the head??. They then pour gasoline over everything accept Castle and set it alight, so everything burns accept Castle, oh and then it all blows up. Castle then manages to survive for what seems like quite a long time before getting picked up. So he's shot point blank in the chest, survives a gasoline explosion point blank range and still lives on...after the bad guys fail to shoot him in the head and fail to burn him up. So that whole sequence fails in two ways then. This film has various issues that didn't sit well with me. Being set in Florida for one thing, the film seems quite bright and sunny all the time because of the location. It doesn't feel right for a dark character like this, its like shoving Batman in Hawaii, the action may still rock but the atmosphere just isn't right. Then there's the issue of Jane as the Punisher, again like Dolph he has the physique but he's blonde!! and all the time I'm thinking his hair looks dyed...because it was obviously. Its a minor quibble I guess but just like Dolph he hasn't got the stubble line either because he's fair haired, is it really that hard to find an actual dark haired man for this role??. So if you put the smaller issues aside what next? well nothing really happens in this. He gets killed off, then announces to the world he's actually not dead which ruins the whole point if you ask me, and then nothing happens!. We don't get any real revenge killing until the finale. He battles two assassins, one is a complete copy from the Rodriguez film 'Desperado' and the other kinda looks like a cross between 'The Sandman' and 'Zangief' out of 'Street Fighter II' and is dressed like a cartoon character. Admittedly the fight against the enormous Russian was quite good but that was it. There are too many sappy moments in here too, attempts at some humour which don't really fit and the characters who live with Castle are terrible. The bad guys again aren't really very memorable either, Travolta is kinda miscast as the main villain and merely comes across as his character from 'Swordfish' (and a few others). The only other bad guy of note would be Will Patton as Travolta's main sidekick, interesting touch making him homosexual but wasn't explored enough, fresh though. On the whole the bad guys were definitely bad enough but just totally bland and generic, unlike the 89 version this film didn't have the explosive fun action to get around that. The slaying of 'Saint' at the end was laughable, not only is there no guarantee he was actually killed (seeing as Castle managed to survive his ordeal), but the iconic skull motive left by all the burning wreckage was just plain dumb (and a 'Crow' rip off). What was the point of it?? no one would ever see it unless in a helicopter!. I'm pretty sure it would be impossible to actually do on the ground and take ages to arrange, when did he get the time??!! so stupid. The film finally comes to life in the finale as Castle finally takes down all the bad guys, the sequence is what you're waiting for the whole time. Had more of this happened throughout the film it may have been much better, but in general there are many bad decisions here which I just don't understand how they were agreed on.

My goodness this was a pretty bad movie. I'm not entirely sure what they were going for, but it seems that the filmmakers weren't particularly concerned with making this thing interesting. The acting is incredibly bad. It even wastes the talent of the late Roy Scheider, which is an unforgivable error. And while I love a good dark revenge fantasy, it didn't really embrace its darkness. Nor did it embrace the light either. It was caught in a purgatory that awkwardly blended drama, violence, and comical gags. It can best be likened to a Jackson Pollock painting. There is a little bit of this, and a little bit of that. But when you step back and look at the entire canvas, you spend your whole time struggling to figure out what the hell you are looking at.