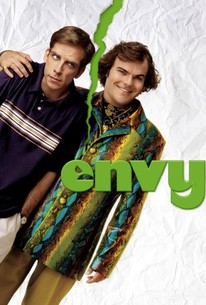 After delivering a critical and box-office hit with 2001's Bandits, director Barry Levinson once again takes on the comedy genre with Envy. The film stars Ben Stiller and Jack Black as Tim Dingman and Nick Vanderpark, two middle-class working stiffs and life-long pals. When Nick comes up with an invention that does away with pet droppings, he and his wife, Natalie (Amy Poehler), suddenly find themselves obscenely rich. However, Tim has a hard time getting used to his friend's good fortune and becomes jealous, putting an increasing amount of tension between the two. Also starring Rachel Weisz, Envy was written by first-time screenwriter Steve Adams from an idea concocted by Adams and Seinfeld creator Larry David.

Angee Hughes
as Woman at Play

Melissa Pouk
as Girl No. 1 at Play

Ashlynn Rose
as Girl No. 2 at Play

Hannah Rosenberg
as Girl No. 3 at Play

Atiana Coons-Parker
as Girl No. 4 at Play

Jacob Greenblatt
as Boy No. 1 at Play

Cayden Boyd
as Boy No. 2 at Play

Nicholas Sugimoto
as Boy No. 3 at Play

Tracy Dixon
as Teacher at Play

Kent Shocknek
as Newscaster
View All

With so many dubious elements at play, even the half-good ideas get lost in the shuffle.

Envy crawls to its finish through a minefield of poor taste and comedic misfires.

The differing styles of the two comedians never meld, but the script is so flabby even an industrial crane couldn't lift it.

Ultimately more amusing than hilarious, and sometimes less than that.

... one of the worst comedies I've ever seen.

For an alleged comedy with such star power, Envy reeks enough to wish there was a vaporizer that would make it magically disappear.

Although the plot is thin, there are elements that are funny.

It's a long, long time between chuckles.

Charlie Kaufman possibly could have uncovered this story's true smugness. Instead, Jack Black and Ben Stiller exaggerate what works about their styles to the point of annoyance in a can't-miss misfire akin to John Belushi and Dan Aykroyd's "Neighbors."

Here's my pitch for a product: A spray that causes really bad movies to vaporize into air.

...certainly not the flat-out disaster it's been made out to be.

Black comedy with Ben Stiller and Jack Black. Best friends and neighbours become estranged as one comes up with a new invention to dissolve pooh and gets rich, while the other is very jealous of his friend's success.

It's not a particularly memorable comedy, but it's fun and original. The chemistry between Ben Stiller and Jack Black are the selling point of the movie, along with a crazy appearance by Christopher Walken. It was an interesting story, but it could've been far better considering the talents.

I didnt really enjoy this movie although its quite amusing the idea of vanishing poo is silly and i like funny movies but this is just ridiculas!! the storyline is a bit dull and the whole idea is just annoyingly stupid!! Really not worth much and its surprising compared to the cast !!