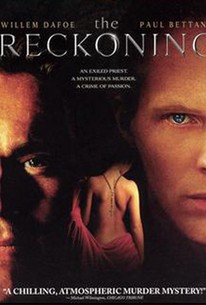 Scottish filmmaker Paul McGuigan directs The Reckoning, based on the award-winning novel Morality Play by Barry Unsworth. Set in 14th century England, the story involves a priest named Nicholas (Paul Bettany) who leaves the church after committing adultery. He falls in with a troupe of traveling actors led by Martin (Willem Dafoe). Nicholas joins them and attracts the attention of Martin's sister Sarah (Gina McKee). The group ends up in a small town where a mute woman (Elvira Minguez) is accused of witchcraft and murder. Drawn to the woman, Martin suggests that the troupe re-create the events in hopes of drawing a crowd and solving the crime. Also starring Brian Cox, Ewen Bremner, and Vincent Cassel. The Reckoning premiered at the Palm Springs Film Festival in 2004.

Valerie Pearson
as Woman at Play

David Luque
as Captain of the Guard
View All

News & Interviews for The Reckoning

View All The Reckoning News

Critic Reviews for The Reckoning

As for young master Bettany, his Nicholas never managed to convince at all. His priest was insufficiently Godfearing, his adulterer not lusty enough, his actor too facile, and his detective too forensic.

Although raising intriguing questions about the moral obligation dramatists have to throw a spotlight on taboo subjects, The Reckoning offers simplistic solutions.

Wraps itself around Bettany's guilty secrets like a hot-water bottle, leaving more interesting characters in the moral cold

After a first hour slowed by exposition and a good deal of extraneous subplot development, the story catches fire in the second hour and keeps you engrossed.

It's not Shakespeare in Love, and it really has no third act, but there's wonder in the scenes of theatrical invention, of theater being made up on the spot, a play in the making.

A thoughtful, clever and well-acted diversion.

It's a shame the story's such a stinker, because this is one great-looking movie.

[It's] a film with a lot on its mind -- perhaps too much. ... As it is, philosophical dilemmas spread through the film like a plague until they finally claim its life.

It's disappointing that The Reckoning devolves into a costumed murder mystery a la Jean-Jacques Annaud's 1986 film of Umberto Eco's The Name of the Rose.

Builds cleverly as the mystery deepens, then struggles to bring it all to a conclusion.

Audience Reviews for The Reckoning

Well, I have most definitely become a Paul Bettany fan. This movie was really good, and of course he was outstanding in it. The rest of the cast did a great job, also, but I think that he really made this film work. Great storyline, and great camera work.

A very compelling and entertaing epic mystery. Well-written and very well-performed by it's cast. A dark, riveting and thrilling film. Willem Dafoe and Paul Bettany are extroadinary.

Starts a little slow but you get captured up in this. I enoyed it, If you like British Film, then you will enjoy this one. For some a rental, other will find it a must for a well Rounded DVD collection.