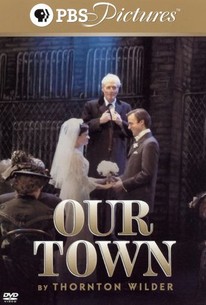 Originally assembled by actress Joanne Woodward at Connecticut's Westport County Playhouse (where she served as artistic director), this highly praised 2002 revival of Thornton Wilder's Pulitzer Prize-winning 1938 play +Our Town enjoyed a brief Broadway stay that same year, and it was during its New York run that the production was videotaped for the Showtime cable network. The revival's principal attraction was Woodward's husband, Paul Newman, in the role of the avuncular Stage Manager, who narrates the action and occasionally converses with the characters on-stage and with members of the audience. Covering a period from 1901 to approximately 1917, the play is set in the New England community of Grover's Corners (conveyed with a bare minimum of sets and props, as dictated by Wilder's original staging notes). The focus is on the romance between Emily Webb (Maggie Lacey), daughter of the town's newspaper editor, and George Gibbs (Ben Fox). The play's three acts run the full gamut of Emily and George's relationship, from courtship, to marriage, to early death. In addition to Newman, the cast of Our Town is full of familiar TV and movie faces, among them Jeffrey DeMunn, Jane Curtin, Mia Dillon, Travis Walters, Stephen Mendillo, and Jake Robards, grandson of Jason Robards Jr.

Wendie Barrie-Wilson
as Lady in the Box

Reathel Bean
as Man in the Auditorium

Wendy Barrie-Wilson
as Woman in Balcony

Cynthia Wallace
as Woman in the Auditorium

Critic Reviews for Our Town

Not bad at all if you really have to see it again.

Reminds us of what an extraordinary work Our Town is and will always be, as long as it's handled by real pros.

Made for TV production still grabs, and with Paul Newman in Stage Director role.

If you missed the sold-out Westport Country Playhouse's production of Our Town, now is your chance to see what made it so incredibly special.

Audience Reviews for Our Town

There are no featured audience reviews yet. Click the link below to see what others say about Our Town!