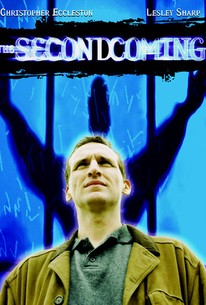 Made for British TV, the allegorical film The Second Coming asks the question "What would happen if Jesus Christ returned to Earth in the form of a modern-day video store clerk from Manchester?" Having gone missing for 40 days, young Steve Baxter (Christopher Eccleston) suddenly appears at a soccer stadium to announce that he is the Son of God. Steve further warns that humankind is doomed unless a third testament is added to the Bible -- within the next five days. The media has a field day with this story, while religious leaders alternately pooh-pooh Steve's divinity or sit and wonder and worry. Ultimately, the fate of the world rests not only in the hands of Steve, but also in those of the girl who may betray him -- a young woman with the ominous name of Judith (Lesley Sharp). Causing quite a stir when it first aired in the U.K., The Second Coming had lost none of its potency -- or dark humor -- when it was seen in the U.S. courtesy of the BBC America satellite service on September 20, 2003. ~ Hal Erickson, Rovi

Critic Reviews for The Second Coming

The first episode was exciting enough to make me want to see how it ended, which I suppose is the point of all religion and, indeed, of science.

It is a feather in ITV's cap that it was prepared to invest in such a fascinating and thought-provoking script, while managing to keep cliche under wraps.

as boring as your typical Sunday sermon

Audience Reviews for The Second Coming

There are no featured audience reviews yet. Click the link below to see what others say about The Second Coming!