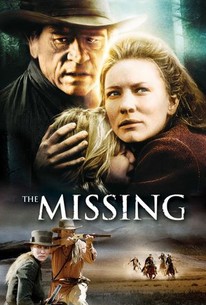 Critics Consensus: An expertly acted and directed Western. But like other Ron Howard features, the movie is hardly subtle.

Critics Consensus: An expertly acted and directed Western. But like other Ron Howard features, the movie is hardly subtle.

Critic Consensus: An expertly acted and directed Western. But like other Ron Howard features, the movie is hardly subtle.

In 1885 New Mexico, a frontier medicine woman forms an uneasy alliance with her estranged father when her daughter is kidnapped by an Apache brujo.

Rod Rondeaux
as Hudlao (The One Who Laughs)

Critic Reviews for The Missing

In 20 years it will probably be regarded as Howard's finest film.

Even Cate Blanchett can't save this misbegotten horse opera.

Mr. Howard keeps the emotional temperature of the family reunion as chilly as possible, but it's clear that the father-daughter relationship is the core of the drama, and the rest is all time-consuming digressions.

The Missing is holiday entertainment for anyone who likes either a dollop of feminist uplift or family values (or both!) with their bloodletting.

A disappointment; relentlessly bleak and brutal.

"The Missing" is overly drawn out but benefits much from Jones's and Blanchett's absorbing performances.

Despite gorgeous scenery and an uncharacteristically subtle soundtrack from James Horner, the film has a 'been-there, done-that' quality.

Audience Reviews for The Missing

A good movie if you like your westerns without a lot of fluff. Maggie's older daughter is kidnapped by a creepy native psychopath, and it is up to Maggie and her father (who she detests) to save her. As well as dealing with the kidnappers, the relationship between Maggie and her dad must be settled. There is a lot going on in this movie.

Not even with the names in this movie can keep me awake during this long uninteresting and uncaptivating movie!

I am prompted to write this review because I've seen so many negative reviews of The Missing, while personally I enjoyed it and believe it can be defended as at least a good film. It's a modern western, a gripping, chilling adventure, in the vein of John Ford's The Searchers but not so epic in scope or tone. The Missing is beautifully shot and brutal at times, a dark, supernatural spin on the western genre, non-traditional even more with a dominant heroine. This type of tale; white girls kidnapped by ruthless Indians prompting a desperate pursuit and siege, has been done before, but this take is fresh. I believe the cast to be excellent, and I appreciate director Ron Howard's approach to the characters. Cate Blanchett is the heroine, effective, tough, and believable. Tommy Lee Jones' character is less effective but no less interesting. He's colorful; he adds expertise, but his heavy baggage and decades-long neglect negate any real leadership potential. Blanchett is the dominant force, and the father-daughter dynamic back-story adds some depth. The Indian sorcerer character, played by Eric Schweig, is brutal and riveting. He's the most frightening character I remember since Hannibal Lecter. His performance is unforgettable, Oscar-caliber. The Missing isn't perfect, but it is an excellent addition to the modern western alongside: Unforgiven, 3:10 to Yuma, and Purgatory. This story has been criticized for being improbable and melodramatic, but from what I've read, Ron Howard insisted on authenticity throughout the film making process. Call the story unbelievable, so suspend a little disbelief here and go along for the ride. You'll enjoy it.

Howard, a true workingman director, rises some to craft this in-love-with-Westerns Western wherein there's more afoot than simply the typical renegade "Injuns". For one thing Dad (Tommy Lee Jones, loving it) done gone native hisself on us. Blanchett (isn't she British or something? whateverrrr ... she's great), frontier healer, has her hands full trying to get her chile outta the hands of one whack Injun medicine man (ala the Duke's The Searchers).