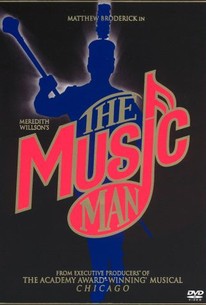 A hit Broadway musical in 1957 and an equally successful Hollywood film in 1962, Meredith Willson's +The Music Man was again brought before the cameras in this lavish made-for-TV adaptation. Standing in for the original's Robert Preston is Matthew Broderick as "Professor" Harold Hill, a glib traveling salesman who descends upon the town of River City, IA, in the weeks just prior to the Fourth of July celebration of 1912. Persuading the populace that the youth of River City is in great danger of being corrupted by the presence of a new pool table, Hill convinces them that their only hope for salvation is the organization of a boy's band, with himself as a leader. Naturally, this will require the parents to shell out good money for band instruments and uniforms, and in exchange, Hill promises to teach the kids how to make music by utilizing his revolutionary "Think System." There's only one problem: Harold Hill is an out-and-out con artist, who doesn't know one note from another. Even so, he manages to win over everybody in town except local librarian/music teacher Marian Paroo (Kristin Chenoweth) and thick-eared Mayor Shinn (Victor Garber). Ultimately, however, Marian joins Hill's camp -- mainly because he has brought her sullen brother, Winthrop (Cameron Monaghan), out of his shell -- but as July Fourth approaches, Hill faces exposure and arrest thanks to a vengeful anvil salesman named Charlie Cowell (Patrick McKenna). A meticulously faithful rendition of the Broadway original, The Music Man happily includes all of the show's wonderful songs, among them "Ya Got Trouble," "Seventy-Six Trombones," "The Sadder-But-Wiser Girl," "Lida Rose," "Marian the Librarian," "Pickalittle," "Til There Was You," and "My White Knight" (which was not used in the 1962 movie adaptation). Though some critics found Matthew Broderick a bit too lightweight and Jeff Bleckner's direction a tad gimmicky, no one could fault the full-bodied vocal renditions, nor the consistently inventive choreography of Kathleen Marshall. Produced by the same team responsible for the 2003 movie smash Chicago, The Music Man debuted February 16, 2003, as an "expanded" episode of ABC's Wonderful World of Disney anthology.

Critic Reviews for The Music Man

It's all very retro-Disney, not harmful but oddly flat.

Fun and tuneful, but not up to Robert Preston original. Still, Broderick is very good.

...never quite becomes as accessible as one would imagine it's meant to be.

Prof. Harold Hill may believe the "think" system will teach his..."band" to play. But no amount of brainpower could make...this Music Man ...anything but derivative.

Audience Reviews for The Music Man

The original version was soooo much better. I didn't see much of it but I saw the scene in the library where they turned Marian into a princess and that was horrible.