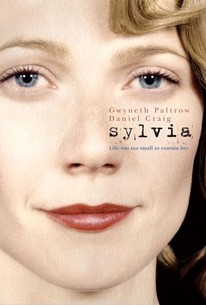 Critics Consensus: This biopic about Sylvia Plath doesn't rise above the level of highbrow melodrama.

Critics Consensus: This biopic about Sylvia Plath doesn't rise above the level of highbrow melodrama.

Critic Consensus: This biopic about Sylvia Plath doesn't rise above the level of highbrow melodrama.

The life of poet and novelist Sylvia Plath -- one of the most celebrated literary figures of her generation -- is brought to the screen in this controversial screen adaptation. Born in Boston, MA, in 1932, Plath (played by Gwyneth Paltrow) developed a precocious talent as a writer and published her first poem when she was only eight years old. That same year, tragedy introduced itself into her life as Plath was forced to confront the unexpected death of her father. In 1950, she began studying at Smith College on a literary scholarship, and while she was an outstanding student, she also began suffering from bouts of extreme depression; following her junior year, she attempted suicide for the first time. Plath survived, and, in 1955, she was granted a Fulbright Scholarship to study in England at Cambridge. While in Great Britain, Plath met Ted Hughes (Daniel Craig), a respected author who would later become the British Poet Laureate; the two fell in love, and married in 1958. However, marriage, family, and a growing reputation as an important poet failed to bring Plath happiness, and as she became increasingly fascinated with death in her later poetry and her sole novel, The Bell Jar, and after Hughes left her for another woman, her depression went into a tailspin from which she would never fully recover. Sylvia was adapted in part from Birthday Letters, a collection of poems Ted Hughes published in 1998, in which he dealt with his marriage to Plath in print for the first time. ~ Mark Deming, Rovi

A prestige picture that doesn't have a lot going for it beyond its serious intentions.

Paltrow does this role exceptionally well, but it is underwritten.

Falls short of its goal.

Fails to reflect the enormous complexity of the tumultuous relationship between Ted Hughes and Plath.

When there are so few stories dedicated to female creativity and pathos, you resent this one all the more for mishandling what might have been.

A Hollywood product that exploits sickness.

Plath might have been the stupid cow that Paltrow plays, the stubbornly ambitious, jealous demonbit genius discontent, immune to the ordinary joys of life.

Gwyneth Paltrow is anything but engaging in this rarely interesting look at the life of author Sylvia Plath.

Gwyneth Paltrow is a shining star and plays a faultless dramatic role.

Paltrow provides the depth that the script lacks, making a lot from very little.

A very tender and dark little biopic that skims the surface of the sensitive and prolific poet and author Sylvia Plath. The film itself was bleak, wounding around the life of Plath, but more than anything also focused on her lover and husband Ted Hughes. Everything is dark angles and gilt mirrors with the poignant performance from lead Gwyneth Paltrow. She is yet again playing a British woman in a destructive relationship, except there is definitely a power play between herself and her husband. Both are poets, both want to be taken seriously, and both have the lowest of lows and the highest of highs. In the film Paltrow showcases Plath's irrelevancy next to her husband's broad fame among the intellectuals and middle class alike. He is dashingly handsome, and ends up romancing many of their female acquaintances, which only drives Plath madder than she already is as a result. Worse, is that he retains the fame whilst she is still struggling to write anything at all. She feels dwarfed in his huge shadow, and the film does a great job of illustrating how isolated Plath was by making her seem small among the darkness of the cinematography. There is little to no light in this entire film. Both Paltrow and her leading man, Daniel Craig, are entirely enshrouded in shadow throughout this film, even when it's supposed to be day. When the sun shines, it's bleak and oppressive,which was highly unrealistic, and gave us the feeling that Plath must have gone through a period of listless hatred, even in the company of her two children. Her erratic behavior lent little in the film, except for the brief scene in the beginning, but she does confide her feelings to an ardent supporter, played by the great character actor Jared Harris. What doesn't work in this film is that there isn't any buildup to Plath's suicide. The ending feels anticlimactic, mostly because her husband isn't assigned any dimensions except that of a vicarious jerk. He flits in and out of the story, only to give her children and make her miserable, but at the end he's only a face in the crowd of onlookers. There was nothing traumatic about this film, nothing to cling to Plath as a person, or the ideals of her work. There just could have been so much more done with the script and the way it was shot, and that really was just underwhelming for me as a viewer.

This movie was very interesting. It was a bit dry at points, but was so intriguing that it kept my complete attention. The psychology of the two main characters was amazing, and the movie was done brilliantly. Also, seeing Paltrow in a new role like this was phenomenal, and very surprising. I think that she did a wonderful job depicting this very, very sad woman. Kudos!

Sylvia stars, Gwyneth Paltrow as the American poet and Daniel Craig as her husband and fellow poet Ted Hughes. It begins with their meeting in Cambridge and ends with Plath's death in 1963, so it essentially follows the course of their relationship, Plath's struggle to write and with the break-up of their marriage, Plath's original but tortured out-pourings, breakdown and death.Gwyneth plays the part quite well she gives a touching performance in my opinion

"sylvia" is a mighty bio-piece of the legendary poetess sylvia plath who terminated her own life by sticking her head into an oven, but mainly about her famous/infamous relationship with british laureate ted hughes who firstly achieved fame by his "hawk in the rain"...personally i absolutely cannot buy into the movie's premise that this is one of the most essential romances in 20th century...but to appreciate "sylvia", you've got to hypnotize yourself with such notion. so sylvia plath is a genius woman who's been obssessed with death after her dad passed suddenly when she was 9, then this young lady with such explosively sparkling intelligence falls under the spell of talented ted hughes who has the magnetism to frighten her off with challenging attractiveness as sylvia's mom puts it bluntly. except hughes' extraordinary gift as a poet, he has nothing adequately made for an ideal husband or father: he's a womanizer, an egoist whose priority is not family but his own recognition and he cannot really offer any solid tenderness to her except some momentary stormy passion. in several scenes of his infidelity, he even angers at her then returns to her later with a brief "sorry, i love you" but still keeps on the same mistakes afterwards. but how about sylvia herself? she's also quite a difficult person with some serious symptoms of paranoia and some severe torments of her death wishes, not easy to get along with, either. it proves one fatal point that if two strong egos build a bond together, the union's doomed to collide into the ruin of one side which is more brittle with stubborn frailty. besides, why brilliant woman likes to be with such arrogant man to be your "black marauder" (as sylvia herself dubs it in her poem) who mostly takes and rarely gives? why not appreciative gentleman who admires the soils you step upon as talented man always marries submissive woman who's easy to handle? gwyneth paltrow amazes me with her showcasing performances, and before i only thought of her as someone who makes her success by dubbing herself with a tangibly conventional east-coast glamour, a grace-kelly-wanna-be. the other surprise would be daniel craig as ted hughes, he's much more appealing as hughes than his later smashing role as millennium james bond. his ruggedness and ballistic energy are all demonstrated quite well as his winsome qualities for a leading man. craig serves an effective purpose to romanticize ted hughes in numerous smoldering love scenes with paltrow, and a sizzling feverish spunk could be felt upon him then somehow you could comprehend why she's so much into him. daniel craig's never been as sensual as he is in "sylvia", but since he was not so well-famed then so the focus of "sylvia" is still majorly on paltrow as her vehicle. in a nutshell, calling the relationship of ted and sylvia one of the essential romances or great loves in 20th century is a hypocritical and absurd idea in spite of all the engrossing intensities the leads have projected on screen, even by watching the movie itself, you could feel this match is bad sass tailored by a woman's compulsively masochistic drive, her own strong need of self-victimization, no wonder of her choice over ted hughes whose second wife also commits sucide in the same way as sylvia plath: head in the oven. besides, it is spoiling enough to have all these literary feuds posed by their separate enthusiastic readers that include those who accuse hughes as chauvinistic asshole who tortures sylvia and those who condemn plath as abrasive psychobitch whose haunting intimidations push her lover away. additionally, some controversial editing problems on hughes' manipulated erase of evidence over sylvia's diaries and parts of her words against him aren't quite plesant to dig into as well. so, wouldn't you find it odd to make an epic romance on a couple of such obvious discord???