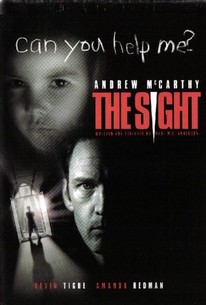 Filmed in London, the cable-TV movie The Sight stars Andrew McCarthy as American architect Michael Lewis. Like the youthful protagonist in the theatrical feature Sixth Sense, the reluctantly psychic Michael "sees dead people." In fact, he sees the ghosts of 21 dead people in a single location, the old British hotel that he has been hired to refurbish. Michael's disturbing "gift" ultimately leads him to the eight victims of a contemporary serial killer -- and, armed with the cryptic clues supplied by these restless spirits, the hero races against time to prevent murder number nine. The pilot film for an unsold weekly TV series, The Sight was broadcast October 29, 2000 over the FX cable network.

Critic Reviews for The Sight

There are no critic reviews yet for The Sight. Keep checking Rotten Tomatoes for updates!

Audience Reviews for The Sight

Wasn't that good, but, then again, not that bad either. What puzzled me was all the Alice in Wonderland stuff. What did they have to do with, well, anything?