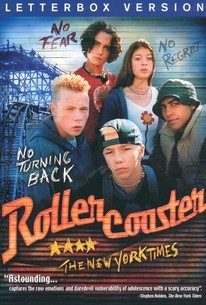 Scott Smith directs this grim Canadian drama about a bunch of dead-end teens chillin' out in an abandoned Vancouver amusement park. The quintet smoke weed, drink hootch, and throw up as they try to make sense of their lives.

There are no critic reviews yet for Rollercoaster. Keep checking Rotten Tomatoes for updates!

There are no featured audience reviews yet. Click the link below to see what others say about Rollercoaster!