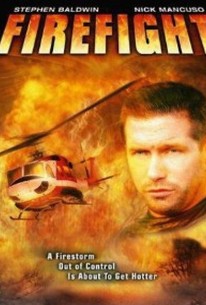 Paul Ziller's action thriller Firefight stars Steve Bacic as a fireman who, with the help of helicopter pilot George (Nick Mancuso), has robbed an armored truck. In order to hide the evidence and get away, the duo has started a fire that has grown into an inferno that is engulfing a forest. Further complicating their attempts to get away with their booty is the psychopathic Wolf (Stephen Baldwin) and his gang of criminals who are also trying to hunt down the money.

There are no critic reviews yet for Firefight. Keep checking Rotten Tomatoes for updates!

There are no featured reviews for Firefight at this time.