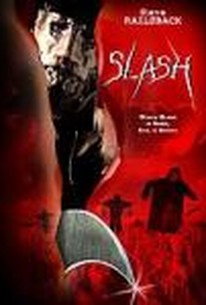 A horrifying family legend comes back to haunt the singer of a popular rock band teetering on the edge of super-stardom in this tale of terror from veteran genre director Neal Sundstrom. Life on the road isn't easy for Slash, a rock band whose big break seems to be forever looming just around the next bend. When death calls lead singer Joseph Macdonald (James O'Shea) back to his rural family homestead to bury a family member, the band takes a detour and heads into corn country. Unfortunately for the members of Slash, death isn't quite finished yet, and it's not long before a mysterious scarecrow who seems to take the band's name as inspiration begins picking off the band members one by one. ~ Jason Buchanan, Rovi

There are no critic reviews yet for Slash. Keep checking Rotten Tomatoes for updates!

Just no redeeming qualities in this one. Wasn't worth the late night time spent.

Oh My God, I actually saw this. I'd successfully erased it from my memory until I saw it on someone's list. O Railsback, Where Art Thou?