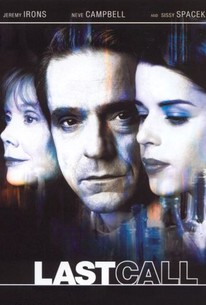 This made-for-cable biopic was based on Against the Current: As I Remember F. Scott Fitzgerald, the memoirs of Frances Kroll Ring. The film covers the years 1939 through 1940, when Frances Kroll (Neve Campbell) served as Fitzgerald's secretary. Once the most celebrated and idolistic novelist of the Roaring '20s, Fitzgerald (played by Jeremy Irons) has degenerated into a burned-out alcoholic, plagued by domestic travails attending his mentally ill wife, Zelda (Sissy Spacek), and his gossip-columnist mistress, Sheila Graham (Natalie Radford). The dedicated and devoted Frances manages to get her boss back on track and off the booze, but it is really too late. Fitzgerald dies at age 44, with what may have been his greatest novel, The Last Tycoon, remaining unfinished. Set in Hollywood (but filmed in Toronto), Last Call debuted over the Showtime network on May 25, 2002.

... I have to say that Irons is an excellent, if an unlikely, Fitzgerald, with just the right amount of frayed charm and damaged curiosity.

There are no featured audience reviews yet. Click the link below to see what others say about Last Call!