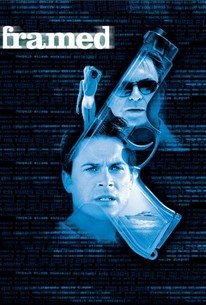 A remake of the 1992 British film of the same name, the made-for-cable Framed begins as New York cop Mike Santini (Rob Lowe) is vacationing with his family in the Bahamas. By chance, Santini spots another "tourist": Eddie Meyers (Sam Neill), a high-profile fugitive mobster and a key player in a major money-laundering scheme. Once Santini collars Meyers, he is surprised at the mobster's friendly acquiescence; in fact, Meyers requests that Santini, and Santini alone, interrogate him once they are safely ensconced in a secluded New York compound. What follows is nothing less than a prolonged seduction, with Meyers using every resource at his disposal -- money, women, lavish gifts, luxurious mansions -- to corrupt the heretofore incorruptible Santini. The American version of Framed first aired April 13, 2003, on the TNT network.

Stewart Bick
as A. Daniel Cole

Ernie Foort
as Nick
View All

In this mostly cerebral thriller, everybody's conning everybody else, and most of them get what they deserve.

OOOH Good movie!! i like this movie it has everything humour, action, twists, good acting, a good storyline. Sam Neil is amazing in this movie and looks Sooo Gorgous, yes it has some floors and could do with some more suspense and tension but apart from that its a good movie thats really worth a watch!!