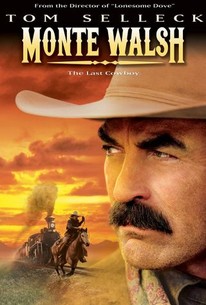 Based on a novel by Jack Schaefer (writer of Shane), and previously filmed theatrically in 1970, the made-for-cable Monte Walsh is the still-timely saga of a dying way of life. Monte Walsh (Tom Selleck) and his friends are cowboys and bronco busters, plying their trade in the Wyoming Territory of 1892. Alas, the advance of civilization has all but rendered Monte and his comrades obsolete -- and with the increasing corporate buy-ups of Wyoming land, these relics of the Old West have practically nowhere else to go. Should Monte continue as before, seeking out the last of the wide open spaces, or should he follow the advice of his sweetheart Martine (Isabella Rosselini) and settle down in a steady job -- say, as a trick rider-roper in the traveling Wild West Show owned by impresario Colonel Wilson (Wallace Shawn)? This elegiac drama debuted January 17, 2003, on the TNT network as part of the cable service's "100 Years of Westerns" celebration. The teleplay is partially credited to one of the scripters of the 1970 film, Lukas Heller, who died in 1988. ~ Hal Erickson, Rovi

Bruce McFee
as The Burley Man

Nary an ironic wince.

Episodic, with so many barely connected bits and pieces that the narrative momentum is largely lost.

There are no featured audience reviews yet. Click the link below to see what others say about Monte Walsh!