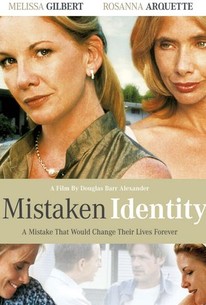 Based on an actual incident at the University of Virginia Medical Center, this made-for-TV drama stars Melissa Gilbert and Rosanna Arquette as Sarah and Linda, two expectant mothers who give birth on the same day in the same hospital. It is not until 18 months after the two women had contentedly gone home with the babies that a DNA test proves the infants were switched at birth thanks to a hospital snafu. Although Sarah and Linda both elect to keep the babies that they've grown to love, they reach an unusual compromise that has profound (and not entirely positive) effects on their respective families and friends -- leading, inevitably, to a heated courtroom battle. Originally telecast by CBS under the title Two Babies: Switched at Birth on November 24, 1999, the film has since been released to video as Mistaken Identity.

Lester B. Hanson
as Dr. Lee

Sharon A. Mitchell
as Judge Marshak

There are no critic reviews yet for Mistaken Identity. Keep checking Rotten Tomatoes for updates!

Good movie, great story, one of the better Lifetime movies out there.

Based on a true story, being switched at birth is eerily more common than one might think. This feel-good movie is heart-warming and fun to watch. It has great lessons and much to walk away with. Both Melissa Gilbert and Rosanna Arquette give amazing performances as mothers desperately wanting to be in their biological son's life but not willing to give up the son they raised.