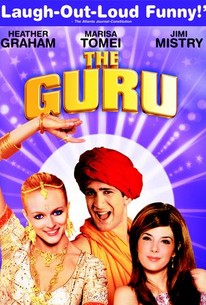 A visitor from the mysterious East arrives in New York -- not to offer the wisdom of the ages, but to make it big as a dancer in this "fish-out-of-water" comedy. Ramu Chandra Gupta (Jimi Mistry) grew up in India on a steady diet of movie musicals, particularly local Bollywood spectaculars and vintage American song-and-dance films. Ramu grew up with the dream of one day making it big as a dancer, and in time he found a job as a dance instructor. However, Raimu believes his destiny lies in the United States, and he leaves India behind to relocate to New York City. Unfortunately, Ramu's bright new future isn't exactly awaiting him, and he's soon sharing an overstuffed apartment with distant relatives in Queens while working in an Indian restaurant. An audition for a film director named Dwain (Michael McKean) turns out to be a tryout for a porno movie -- a role Ramu does not get when he fails to rise to the occasion. However, he does make the acquaintance of one of Dwain's "starlets," Sharona (Heather Graham), with whom he soon finds himself infatuated. Ramu gets a job entertaining guests at a party catered by his relatives when the performer originally booked is incapacitated. While Ramu's Bollywood-style dancing goes over well enough, he makes a deeper impression on Lexi (Marisa Tomei), an enthusiastic but half-bright student of Eastern philosophy who regards Ramu a font of wisdom as well as a hot date. Ramu quickly becomes the toast of New York's upper crust, and scores an agent, Josh (Rob Morrow), but how long will it be before folks realize Ramu is rather low on the enlightenment scale? And can he find happiness with Sharona while Lexi is still in the picture? The Guru also features Christine Baranski and Malachy McCourt.

Susham Bedi
as Lady in Glasses in Dance Class

Sanjeev Bhaskar
as Rasphal, the Cook

Steven Randazzo
as Tony, the Baker

Edythe Bronstein
as Turned On Woman

Roger Kachel
as Turned On Man

Wayne Gurman
as Guy in Bar

Sally Jessy Raphael
as Herself

Critic Reviews for The Guru

Devoid of life, intelligence, humor, and anything else that could entertain even the most undemanding viewer, this film is a perfect example of something that should have been shipped to landfills, not multiplexes.

A precipitous comedic falloff in the third quarter earns the film a qualified recommendation at best.

A trifle, a silly one at that, but it's a charming trifle that's hard to resist.

The movie offers up too many airy spiritual lessons in the hope of crossing from farce to sentiment.

A mixed-up masala saved only partly by a charismatic cast.

It's the kind of half-cocked story only a Hollywood executive living in the midst of pretense, piety and crackpot fads could love.

Not only a tepid Bollywood imitation, but a tepid film, period.

This American version of a Bollywood musical is one of the worst films I have run across in the last few years.

. . .a noble effort to bring the thrills of Bollywood to America, but this magic carpet never quite gets off the ground because it traffics in too many cinematic clichés. . .

A film whose good heart and musical numbers are much bigger than its shortcomings.

Audience Reviews for The Guru

This one failed the rewatch test. I remember thinking it was quite good when it was first out many, many years ago. Geez. What was I thinking!

The film lacks any big laughs and you'll probably forget you saw it an hour later. It has its moments and its sweet but is let down because of its water thin plot and lack of anything we haven't seen before.

very funny jimi mistry is just hilarious! Funny to think he was in eastenders not so long ago lol