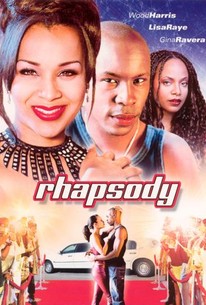 A new kingpin in the world of rhythm and blues finds dealing with both success and relationships cause more than a few problems in this drama. Dollar Bill (Wood Harris) is a record producer who after years of struggle has finally reached the top in his field, and Bill and his girlfriend Lenore (Gina Ravera) are enjoying the well-earned perks of the Hollywood high life. But despite the fact Bill and Lenore are happy together, many of their friends believe Bill is losing touch with the sounds of the street which helped make him a success in the first place. As Bill is caught between living his new life and keeping it real, his former lover (LisaRaye) comes back into the picture, and while her smooth singing style could help Bill earn his next hit record, her renewed interest in her ex could put a stake through the heart of his relationship with Lenore.

There are no critic reviews yet for Rhapsody. Keep checking Rotten Tomatoes for updates!

There are no featured reviews for Rhapsody at this time.