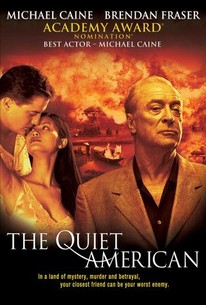 Graham Greene's allegorical novel about America's role in the Vietnam conflict, and how it was perceived by the rest of the world, is brought to the screen for the second time in this adaptation directed by Phillip Noyce. Thomas Fowler (Michael Caine) is a British journalist who in 1952 is covering the early stages of the war in Indo-China for the London Times, not a demanding assignment since few in England are especially interested in the conflict. When not filing occasional reports, Fowler spends his time with Phuong (Do Thi Hai Yen), a beautiful woman who shares lovemaking and opium with Fowler and is willing to accept the fact the married journalist will never make her his wife. Fowler becomes friendly with Alden Pyle (Brendan Fraser), a cheerful and articulate if seemingly naïve American who is in Saigon as part of a medical mission. As Fowler and Pyle develop a closer friendship, Pyle is introduced to Phuong, and the American soon becomes infatuated with her. When Fowler's editors suggest he return to London, he responds by digging himself deeper in covering the war, and Pyle attempts to take Phuong away; she soon rejects him. Undaunted, Pyle continues with his work, but Fowler discovers that medical help is not what the American is bringing to Vietnam. Pyle is in fact a CIA operative who is helping to organize and finance a "Third Force" who will battle Ho Chi Min's forces as well as the French and their allies. Fowler also learns that Pyle is behind a series of bombings which are believed to have been carried out by Communist extremists, and faces the ugly fact that his American friend is in fact a terrorist killing in the name of Uncle Sam's political interests. While completed in the fall of 2001, The Quiet American went unreleased until late 2002; after the terrorist attacks of September 11, 2001, the film's producers felt the film's critical view of America's role in the Vietnam war might be considered especially offensive. ~ Mark Deming, Rovi

Do Thi Hai Yen
as Phuong

Do Hai Yen
as Phuong

Quang Hai
as General The

News & Interviews for The Quiet American

View All The Quiet American News

Critic Reviews for The Quiet American

The Quiet American is a lovely little mover, barely breaking into a sweat as it dances its dreadful dance of love and need to the backing tune of political unrest, moral ambiguity and subterfuge.

[Caine] gives one of his best performances, whether dissembling a new-found inner steel under questioning or breaking down in the privacy of a toilet.

Caine, who also starred in one other Greene adaptation, 1983's The Honorary Consul, is the essence of almost all the author's misfits -- a practiced cynic masking an aching romantic.

Noyce has no trouble convincing us he's made a film for our times. Even better, he's done it without upsetting the climate of the place where all Greene's novels are set, regardless of their actual position on the map.

The Quiet American was filmed in Vietnam and does a wonderful job of conveying a sense of place and time.

For Caine, it's a peak performance in a career that has had many of them.

The Quiet American is an accurate if not entirely soul-quaking adaptation of Greene's style to film. It establishes such a believable atmosphere of quiet, old-fashioned gentility that when a moment of violence occurs, the carnage is even more devastating.

A stylish, gauzy thriller and a character study of zeal and detachment that meet on an inverse scale of idealism. An intriguing, if not entirely harrowing, grapple with the idea that being human does not inherently mean being good.

You can't capture that prescience in a remake half-a-century on.

A subtle and penetrating work, made to look effortless; nothing is forced or pushed, so much so that it's easy to overlook the extraordinary challenges posed by Graham Greene's novel.

The film may be a not especially unusual mystery/thriller, but it's still a solid and entertaining one at that.

Audience Reviews for The Quiet American

A faithful adaptation of Greene's wonderful novel, very well edited and with an exquisite production design, a beautiful score and Michael Caine in one of his best performances - besides the exceptional way that the narrative interweaves romance and politics to near perfection.

Graham Greene novels tend to make the transition to cinema quite well, and this political drama set in the years preceding America's involvement in Vietnam is no exception. It's an interesting period piece as the subject matter is rarely seen on the screen and Michael Caine lends his usual presence and skill to the part of a British foreign correspondent who loses his objective detachment after becoming involved with the affairs of an American aid worker. It's a well made and well intentioned film but I found it a little schizophrenic, unable to decide whether it's core was romantic drama or political intrigue. I was far more interested in the political side of things but neither aspect seemed fully developed and only Caine's performance really engaged as Brendan Fraser seemed out of his element. A decent attempt though but it in no way equals the visceral impact or emotion of the likes of The Killing Fields or Salvador.

Good film in my opinion, Brendan Fraser does a good job. Michael Caine is excellent, time period in the years that set the scene for the Vietnam War, not focused on a lot in movies.