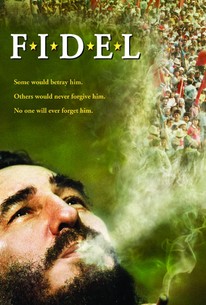 Critics Consensus: Fidel offers a hefty -- albeit still frustratingly incomplete -- overview of one of the 20th century's most notorious political figures.

Critics Consensus: Fidel offers a hefty -- albeit still frustratingly incomplete -- overview of one of the 20th century's most notorious political figures.

Critic Consensus: Fidel offers a hefty -- albeit still frustratingly incomplete -- overview of one of the 20th century's most notorious political figures.

Filmed in Mexico and the Dominican Republic, this massive biography of Cuban leader Fidel Castro begins in the 1950s, when the title character, then a young and hungry lawyer, bristles at the iniquities and corruption of the Batista political regime. Inspired by the words by left-wing radio commentor Eddie Chibas (Hector Elizondo), Fidel becomes active in a revolutionary movement aimed at toppling Fulgencio Batista (Tony Plana). In 1959, Castro and his followers stage a spectacularly successful coup, one that is staunchly supported by thousands of idealists and Cuban expatriates in the United States. Unfortunately, to paraphrase cartoonist Bill Mauldin, no sooner has Fidel come down from the hills like Robin Hood than he begins behaving like the Sheriff of Nottingham, killing scores of his political enemies in round-the-clock executions, routinely snatching away the basic human rights that he had promised his followers, and embracing Communism with a fervent passion. Although the film does not shy away from showing the darker side of Castro, it is essentially sympathetic to its subject, balancing the Cuban dictator's political outrages with his many acts of benevolence, and attempting to provide "motivation" for what seem to be appalling contradictions. Victor Huggo Martin and Honorato Magaloni are cast respectively as the younger and older Castro, with Maurice Compte as his brother Raul and Gael Garcia Bernal as the ill-fated Che Guevara.Fidel was originally telecast in two parts over the Showtime cable network on January 27 and 28, 2002.

Throughout this, audience is treated to a pretty comprehensive history lesson.

Purely propaganda, a work of unabashed hero worship, it is nonetheless -- and likely inadvertently -- a timely and invaluable implicit reminder of the role that U.S. foreign policy has played in the rise of Castro.

Makes an aborbing if arguable case for the man's greatness.

Has the kitsch appeal of a farm implement on a restaurant wall, or an Andy Warhol Mao poster: Interesting, but not for its original purpose.

Audiences will find no mention of political prisoners or persecutions that might paint the Castro regime in less than saintly tones.

Although Estela Bravo's documentary is cloyingly hagiographic in its portrait of Cuban leader Fidel Castro, it's still a guilty pleasure to watch.

Offers a completely one-sided view of Castro and his life and career.

A landmark work that should have viewers across the world reaching for history books to learn not only politically expedient accounts of Fidel's life, but also the real deal.

Bravo reveals the true intent of her film by carefully selecting interview subjects who will construct a portrait of Castro so predominantly charitable it can only be seen as propaganda.

An overview portrait more impressionistic than anything else, hardly psychologically plumbing... Still, leftist politics aside, the film undeniably works on a human level.

Any film that doesn't even in passing mention political prisoners, poverty and the boat loads of people who try to escape the country is less a documentary and more propaganda by way of a valentine sealed with a kiss.

It's a refreshing change from the self-interest and paranoia that shape most American representations of Castro.

This film does a good job of explaining Castro both in the 1950s before, and during, the revolution. The best part is showing Castro's narcissism, and ego. Any attack on the revolution is a personal attack on him, and vice versa. This is definitely an anti-Castro film by the end. United States biased view, I am sure. Still, a very interesting, and well done effort. Any film that sparks my interests, and prompts me to research for more information, is a good deed in my book.