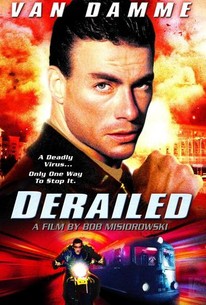 Critics Consensus: Derailed is one of those familiar and pulpy cautionary tales that depend largely on implausible coincidences and preposterous twists.

Critic Consensus: Derailed is one of those familiar and pulpy cautionary tales that depend largely on implausible coincidences and preposterous twists.

Director Bob Misiorowski helmed this straight-to-video actioner starring Jean-Claude Van Damme. Van Damme plays Jacques Kristoff, a special government agent assigned to protect Dr. Galina Konstantin, a scientist played by Laura Elena Harring (Mulholland Drive). When a group of terrorists hijack the train they're riding and demand to see Konstantin, it's up to Kristoff to defeat the bad guys before they get their hands on the biological weapons the doctor has with him. Also starring Tomas Arana and Susan Gibney, Derailed was released in Europe under the title Terror Train.

Ivan Ivanov
as Conductor
View All

Audiences don't get fooled with such sloppy work, and once we lose credibility in the filmmakers, it's pretty much like a balloon pheerrzzing out its air.

The sad truth is that those Brussels Muscles are just about all dried out.

silly premise but it is fun at times when they aren't cutting budget constraints. the ending sucks

Van Damme makes this damn fantastic and thrill-action ride film with the train out of control and takes on the terrorists to save the lives of everyone on board.