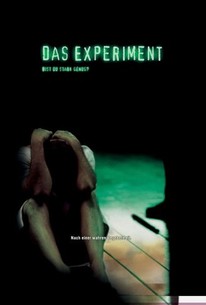 Critics Consensus: Das Experiment's knotty plot may not prove as revelatory as it promises, but it succeeds as an action film with a lot on its addled mind.

Critics Consensus: Das Experiment's knotty plot may not prove as revelatory as it promises, but it succeeds as an action film with a lot on its addled mind.

Critic Consensus: Das Experiment's knotty plot may not prove as revelatory as it promises, but it succeeds as an action film with a lot on its addled mind.

A man taking part in a scientific study finds the fine line between play-acting and reality has been blurred beyond recognition in this taut drama. Tarek Fahd (Moritz Bleibtreu) is a journalist who is temporarily making ends meet by driving a taxi when he sees an advertisement offering 4,000 marks to people willing to submit to a psychological experiment. Intrigued, Tarek offers to take part in the study and persuades one of his former editors to help him work up a story about his experiences. Recording the events using a special high-tech video camera hidden in his glasses, Tarek arrives for the two-week experiment to discover half of the volunteers will pose as prison guards and the other half will be their prisoners. Before long the behavior of the subjects suggests more than just make-believe; "inmate" Tarek, in particular, is unwilling to take abuse from the "guards" and makes no secret of his contempt, while Berus (Justus VonDohnanyi) begins playing a dangerous game of cat-and-mouse with Tarek. Tarek, meanwhile, begins escaping reality by fantasizing about Dora (Maren Eggert), a woman with whom he had a brief fling before taking part in the experiment.

Christian Berkel
as Steinhoff Prisoner No. 77

Oliver Stokowski
as Schutte Prisoner No. 38

Stephan Szasz
as Prisoner No. 53

Polat Dal
as Prisoner No. 40

Danny Richter
as Prisoner No. 21

Ralf Muller
as Prisoner No. 15

Markus Rudolf
as Prisoner No. 74

Peter Fieseler
as Prisoner No. 11

Thorsten J.H. Dersch
as Prisoner No. 86

Sven Grefer
as Prisoner No. 94

Uwe Rohde
as Hans
View All

The movie's central premise -- is well supported in a film whose strength is in its close-ups on characters and its ability to put the viewer in the cell with them.

Probably it's more action film than anything else, but has enough insight to be of interest to serious filmgoers.

What impressed me is how effective the movie was, even though the outcome is a foregone conclusion.

An R-rated version of Survivor, Big Brother or any number of reality-TV shows that present voyeurism as entertainment and exploitation as insight.

Das Experiment may make an obvious point, but it's still a relevant one.

In the end, it looks as if this experiment proves only one thing: People forced to play guards and prisoners tend to end up imitating bad prison movies.

Never has there been such a chilling portrait of the human psyche.

Go in expecting whatever you want, chances are you're going to get something that much better.

When a picture about the roots of evil takes the easy way out, the price is potentially more grave than just the failure of a film: it starts to smell a little like exploitation, after all.

20 men volunteer to participate in a lab experiment in a simulated prison. At first the men have a good time with it, but then things go downhill when some of the men take the experiment more seriously than others. The film is based on a true experiment, and the results are pretty much what you expect, if you're familiar with either the original experiment or LORD OF THE FLIES. Pretty grim at times, and not a feel-good film by any means. But the performances are good, and the film is involving and intense. Fans of films such as TAXI DRIVER would find things to like here.

Das Experiment is a theatrical "what if" inspired by the infamous Stanford Prison Experiment (1971) and Mario Giordano's subsequent novel. The script is gritty enough but there are more than a few holes and lapses of logic. Still, the overall aura of the film is gripping and intense. I'm sure an inferior Hollywood remake is already in the works (see also: RIngu, Old Boy, Let the Right One In, etc., etc., etc.)

Based on a real life psychological experiment, the simulated prison environment is like a ticking timebomb, waiting to see the power struggle between Guards and Prisoners unleash into violence and humiliation. A good film, well acted, but possibly not quite as good as a lot of reviews have led me to believe, I think, because the ending tends to go on for a little too long.

The Experiment failed to yield any favorable reports for me. If you wish, experiment it on yourself; though IMO, it should be aborted.