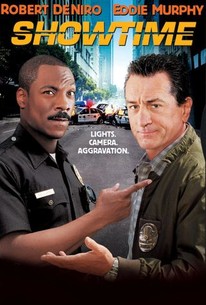 Critics Consensus: Showtime starts out as a promising satire of the buddy cop genre. Unfortunately, it ends up becoming the type of movies it is satirizing.

Critics Consensus: Showtime starts out as a promising satire of the buddy cop genre. Unfortunately, it ends up becoming the type of movies it is satirizing.

Critic Consensus: Showtime starts out as a promising satire of the buddy cop genre. Unfortunately, it ends up becoming the type of movies it is satirizing.

Robert DeNiro continues to lampoon his tough-guy persona with this spoof of buddy cop movies that teams him with comic co-star Eddie Murphy. DeNiro is L.A.P.D. detective Mitch Preston, a gruff, no-nonsense 28-year veteran whose bust of a drug gang is botched one night by Trey Sellars (Murphy), a bumbling patrolman who's really a frustrated actor at heart. When Mitch's aggravation is captured by a television news crew, he fires his gun in their direction and becomes an instant media celebrity, while earning himself a temporary suspension at work. After his fame draws the attention of network TV producer Chase Renzi (Rene Russo), Mitch is soon informed that the only way he can get back to work is to allow a production crew to trail him on the job for a new cop reality series called "Showtime". In order to make the taciturn lawman more palatable to the viewing public, he's paired with the camera-friendly, fast-talking Trey. The new partners drive each other crazy, but their mismatched sensibilities make for great TV, while their newfound fame has its advantages in getting them back on the trail of those escaped drug dealers, who possess a powerful new weapon. Showtime co-stars Frankie Faison and William Shatner, who sends up his own TV cop role in T.J. Hooker. ~ Karl Williams, Rovi

Johnnie L. Cochran Jr.
as Himself

The thinness of the conception gives the actors so little room to maneuver that they turn in uniformly one-note performances.

There's surely something wrong with a comedy where the only belly laughs come from the selection of outtakes tacked onto the end credits.

This has the feel of something that was written by committee and it's all been done before.

So pleased with its own spoofy conceit it stays in annoyingly self-amused, predictable mode.

It's not so much the generally preposterous premise as it is its sloppy handling that completely unhinges the film.

A funny movie for adults and older teens.

Throughout the movie, De Niro scowls and looks as if something smells bad -- and something does. It's the script.

What can you say when the best thing about a movie is William Shatner playing himself and parodying his own persona?

...the real problem with Showtime is that, for a comedy, it's not nearly funny enough.

Pairing no-nonsense actor Robert De Niro and comedy king Eddie Murphy may have been a clever idea rife with possibilities, but they are working for a creative team that ultimately misses its own point.

Shatner is probably the funniest person in the film, which gives you an idea just how bad it was.

I came to this film because a blogger on Facebook had opined that 2002 was the year DeNiro decided that he didn't give a damn anymore. I fully expected the worst, but no, what one gets is a serviceable buddy cop comedy, no more. Sure, an A-list crowd and presentation, but still just one more in a slew of these things.

It's not the worst thing Eddie Murphy has ever done, but it might be De Niro's. It is a failed attempt at a buddy cop revitalization. It has very little comedy that isn't stale and overdone. It was a complete waste of two good actors. Zero originality.