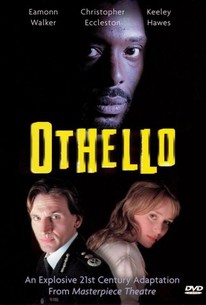 This British TV production of Othello is more than a mere updating of the classic William Shakespeare tragedy; with freshly rechristened characters and brand-new dialogue, the film qualifies as a "rethinking" of the 17th century Shakespearean play, albeit still retaining the original's power and potency. The story is set in the London of the near future, a crime-ridden metropolis virtually torn apart by racial hostilities. By order of the Prime Minister, black police officer John Othello (Eamonn Walker) is promoted to Commissioner, a post dearly coveted by Othello's friend, mentor and fellow officer Ben Jago (Christopher Eccleston). Seething with jealousy, Jago contrives to discredit Othello in the eyes of the public, and to destroy John's interracial marriage to the lily-white Dessie (Keeley Hawes). Among those used as unwitting dupes to gain Jago's ends are Othello's trusted lieutenant, Michael Cass (Richard Coyle), scrupulously honest police constable Alan Roderick (Del Synnott), and Jago's own wife, Lulu (Rachael Stirling). Typical of the film's modernizations is the handling of the evidence "proving" Dessie's infidelity. In place of the incriminating handkerchief in the Shakespearean original, a robe is offered which has been tampered with by Jago so that the DNA lab will find evidence that Dessie has not only cuckolded Othello, but also is part of a greater plan to ruin his reputation. A co-production of London Weekend Television, Canada's CBC, and America's PBS, Othello was first shown in the U.S. as part of the last-named network's Masterpiece Theatre anthology on January 29, 2002.

Samantha McDonald
as Woman in Court
View All

Anyone who buys into the idea that tragedies are supposed to be ennobling should take a look at this contemporized version of Othello on Masterpiece Theatre, a potently disturbing telepic probably without peer.

If they're going to get rid of all that iambic pentameter, why not change the depressing ending too?

There are no featured audience reviews yet. Click the link below to see what others say about Othello!