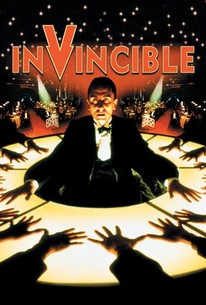 Critics Consensus: Sluggish and flawed, this is a minor work in Herzog's career.

Critics Consensus: Sluggish and flawed, this is a minor work in Herzog's career.

Critic Consensus: Sluggish and flawed, this is a minor work in Herzog's career.

Invincible tells the true story of Zishe Breibart, a Jewish blacksmith from eastern Poland who travels to Berlin in the 1930s to join a nightclub cabaret. He is billed as the world's strongest man - a claim that is not well received by the rising Nazi party. Using his role as the modern day Sampson to defend his own people, Zishe embarks on an inevitable path to tragedy.

Max Raabe
as Master of Ceremonies

James Reeves
as Colossus of Rhodos

Guntis Pilsums
as Innkeeper
View All

Though few will argue that it ranks with the best of Herzog's works, Invincible shows he's back in form, with an astoundingly rich film.

A strange but oddly memorable film.

Half-baked Herzog, though it has twinkles of theatrical purity that remind you of when his vision was grand.

The movie has the power of a great silent film, unafraid of grand gestures and moral absolutes.

By the time Papale does make it the big game, it's as if the air goes out of the movie and all Core can do is punt.

Edifies Herzog's preoccupation with blurring the distinction between performance and naturalism, fiction and documentary.

Invincible approaches history as myth, striving not to document reality, but to penetrate its tragic essence.

...the naivete of his performance has a humbling effect on a film that, while entirely too long and short on sizzling imagery, is meant to be taken simply as folkloric.

Herzog, a man of detail became enraptured with his subject and was unable to use his editing shears.

This is typical Herzog: he makes a touching film about Jews in Germany and the rise of the Nazi party, without overloading the film with pity or melodrama. And he still manages to get in his lingering "nature shots".

Based on actual events, Werner Herzog chronicles the rise and fall of Polish strongman Zishe Breitbart who entertained affluent Germans in pre-WWII Berlin. Herzog manages to capture the historical significance of the events but a meandering script and suspect performances left me feeling a bit cheated and underwhelmed.

"Invincible," which completely flew under everyone's radar WAY back in 2001, is a fascinating film... a colorfully painted tale of individual triumph in the face of adversity. Based on fact, the film is a very straightforward effort, but is not completely void of Herzog's off-kilter style and sensibilities. It feels very dreamlike, and has a certain elegance and whimsy. Adding to this quality is a cast of relatively inexperienced actors (Tim Roth and a few others being the exceptions). The Hulking Jouko Ahola for example, the hero of the narrative, has a very limited acting range and ability but delivers a very likable, touching, and admirable performance in spite of himself. But no doubt it is Herzog who deserves credit most. Each scene is filled with the passion and love he obviously had for this material, and luckily his emotions bleed through. This is a powerful story told in a very unique and level-headed fashion. See this Gem. Another really interesting film from Herzog.

Always hard to know how to feel about a Herzog film. The man is certainly anything but normal and this often comes across in his films. This true story however is one of his straightest narratives and works brilliantly. Every scene is one of interest fascination. The story itself is the true story of a Jewish blacksmith who goes to Berlin to seek his fam and fortune only to become involved in a weird stage show that caters to the Nazi's. The main star is actually a bodybuilder and some have criticised his performance but to me he was certainly stilted but so was the character. Obviously quite simple and often naive. It could also be that his performance was held back to further highlight Roth's excellent charismatic turn, and perhaps the attractive lure of the Nazi's in general. It's a fascinating story and one that has an excellent twist that causes you to re-evaluate certain aspects of the film. It's deep, tragic but most of all entertaining, which as we discover can be just as strong as any army.