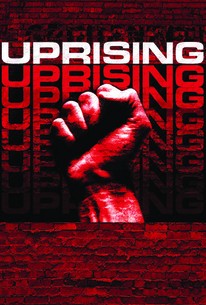 One of many "inspirational" programs shown in the months following the September 2001 Twin Towers tragedy in New York, Uprising is based on the true story of the Jewish Fighting Organization, a courageous band of youthful Polish guerillas and freedom fighters who refused to knuckle under to the Nazis during World War II. Led by schoolteacher Mordechai Anielewicz (Hank Azaria), the organization comes into being as the Warsaw Jewish ghetto is being systemically decimated and shipped off to the Treblinka death camp by the German occupational forces. From April 19 to May 16, 1943, Anielewicz' followers staged a valiant uprising, which, though ultimately unsuccessful in stopping the Nazi "final solution" juggernaut, inflicted an enormous amount of damage upon the enemy and enabled hundreds of Polish Jews to escape the gas ovens and crematoriums. Much of the story is based upon the eyewitness testimony of surviving freedom fighter Simha "Kazik" Rotem, portrayed in the film by Stephen Moyer. Director Jon Avnet brilliantly combines newly filmed scenes with digitally refashioned archival footage of the actual uprising. Filmed in Bratisla, Slovakia, and boasting an all-star cast, Uprising was shown in two two-hour installments on November 4 and 5, 2001, over the NBC network.

Uprising must be a movie because it makes us feel better about ourselves, when we know perfectly well that we don't deserve to.

A solid network effort about heroism in a most immoral world.

Uprising, though flawed in a lot of ways, is still worth checking out if only to learn about a true-life inspirational tale.

Merits watching if only because it's a bracing corrective to the deeply entrenched image of Europe's Jews plodding, sheep-like, to their deaths in Nazi concentration camps.

Very good made-for-tv mini series. Plenty of stars, thoughout. As a made-for-TV movie, this really does excel. The sheer scale of it is impressive enough, but in addition to that it is well paced, well written and well acted (with the exception of David Schwimmer who I just can't get past seeing him as Ross). I, also, learned a lot about the Jewish Polish resistance during WWII which I knew little about. Nice job!