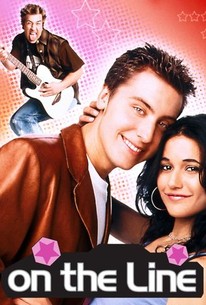 Critics Consensus: An inept attempt at a romantic comedy aimed at 'Nsync fans.

Critics Consensus: An inept attempt at a romantic comedy aimed at 'Nsync fans.

Critic Consensus: An inept attempt at a romantic comedy aimed at 'Nsync fans.

On the Line Photos

Two of the members of popular boy band 'N Sync make their feature acting debuts with this light romantic comedy. Lance Bass stars as shy Kevin Gibbons, an advertising executive in Chicago who's notoriously maladroit at dealing with the opposite sex. After a chance encounter with his dream girl (Emmanuelle Chriqui) aboard the El train, Kevin forgets to ask for her name and phone number and plasters the Windy City with posters seeking his lost love connection. Kevin's quest to find the mystery girl soon attracts the attention of a newspaper reporter and he becomes a media darling, while his roommates Rod (Joey Fatone), Randy (James Bulliard), and Eric (Gregory Qaiyum) take full advantage of the amorous response by Chicago's female population to their friend's heartbroken search. On the Line (2001) co-stars Dave Foley and Jerry Stiller, along with singer Al Green as himself.

Al Green
as Himself

Sandra Cladwell
as Reebok Client No. 1

Kelley Hazen
as Woman at Wrigley

Alexandra Delory
as Girl with Braces

Adrian Churchill
as Guy at Bar

Ananda Lewis
as Herself

Brandi Williams
as Herself

Sammy Sosa
as Himself

Damon Buford
as Himself

Eric Young
as Himself

Critic Reviews for On the Line

An innocuous romantic comedy about missed connections, like Serendipity for people who can't vote yet.

Less a romance than a feature-length plug for 'N Sync and its personalities.

Certainly, you could find far more unpleasant ways to while away 85 minutes.

On the Line tries too hard to be everything to everyone. And as the saying goes, when you try to please everyone, you end up pleasing no one.

The movie has some clumsy dialogue and awkward turns, but the picture is brisk and likable.

This movie is so loopy and simplistic, you question the inspiration behind such a sappy farce.

For his character being such a die-hard Cubs fan, [Lance] Bass throws a baseball like an 8-year-old girl.

Let's put it this way - there are bad movies, really bad movies, and there's On the Line.

The film delivers on its admittedly modest mission -- to painlessly effect a pop star's transition to movie actor -- despite being not very subtle.

Audience Reviews for On the Line

The best part about this movie was Emmanuelle Chriqui, she is smoking hott! There's a good range of cool songs and some pretty funny comedy through out it as well. The only downfall really was kind of a typical love story that you could guess the ending of before the movie already started. Nonetheless it's a pretty good movie to watch - a good date movie, if it does nothing else for some people.

I think this would have been a great movie without the likes of Emmanuelle Chriqui as the lead female character. Anyone would have been a better selection. Lance Bass's character wasn't convincing enough. The Half-Star rating goes to Joey Fatone in his ever musical pursuit to be the next big Rock-Star!

On the Line Quotes