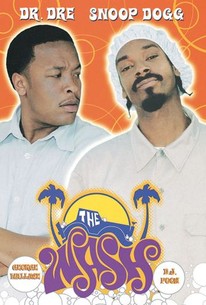 This throwback to the frolicsome comedies of the 1970s is from writer/director D.J. Pooh, creator of Friday (1995) and 3 Strikes (2000). Dr. Dre stars as Sean, who's financially strapped and on the verge of losing his home and his car until his roommate Dee Loc Snoop Dogg suggests he join him as an employee at the local car wash. Tensions mount between the pals when the establishment's eccentric owner Mr. Washington (George Wallace) promotes the more mature and responsible Sean over Dee Loc, and Sean is subsequently forced to crack down on his scamming buddy's side hustles and locker room assignations with female co-workers. When their boss is kidnapped, however, Sean and Dee Loc must work together to save their employer, their jobs, and their friendship. Angell Conwell and Tom "Tiny" Lister Jr. co-star in this urban farce flavored with a hip-hop soundtrack.

Pauly Shore
as Man in Trunk

Eminem
as Chris (uncredited)
View All

News & Interviews for The Wash

View All The Wash News

Critic Reviews for The Wash

Two roommates start to antagonize each other after one becomes the other's superior at an LA car wash, and the conflict is played out with grittiness and flippancy.

Snoop, Dre and their buddies take it all in stride -- if they were any more laid-back, they'd be napping in their trailers.

The lame, underdeveloped jokes far outweigh the fresh ones, the women are all chirpy airheads, and the whole thing hangs on a feeble storyline.

[A] crude and boring movie.

There's precious little to listen to, laugh at or ogle.

Some energetic performances from the cast may make this accessible to a wider audience.

Waterlogged from start to finish

I was wishing I was sitting through Bones a second time.

You've really got to wonder sometimes how talented people end up in hopeless misfires like this film.

a plotless, mostly humorless time-killer that exists primarily as a 90-minute commercial for a star-studded soundtrack. ... the movie has all the earmarks of the "let's just make it up as we go along" school of filmmaking.

The Wash is Santo & Johnny through a swamp of mounting disinterest.

Audience Reviews for The Wash

A boring and poorly-made movie on all fronts scarce on legitimate humour. The only appeal is the collection of hip-hop stars that appear including Dr. Dre, Snoop Dogg, Eminem, Xzibit, Ludacris, and even, Shaquille O'Neal. Despite this, the plot doesn't seem to be going anywhere for the longest time and you will find yourself very disinterested early-on. The acting is nothing special and the direction is sloppy. Coming from a big fan of Dr. Dre and Snoop Dogg's music, the movie is an overall mess that isn't good at any one aspect to keep you entertained.