A Slight Case of Murder1999 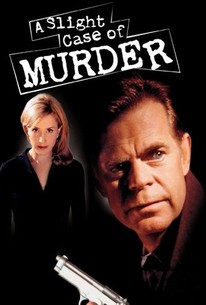 A Slight Case of Murder Photos

Based on a novel by Donald E. Westlake, this seriocomic tale of murder and manipulation stars William H. Macy as nerdish but powerful movie critic Terry Thorpe. During an argument with his lover, Terry accidentally kills the woman, forcing him to go great lengths to cover up his crime. Unfortunately, the dead woman was being tailed by smarmy private eye John Edgerson (James Cromwell), who suspects foul play and blackmails Thorpe accordingly. Meanwhile, the case is being officially investigated by police detective Fred Stapelli (Adam Arkin), an aspiring screenwriter who hopes that Thorpe will help him make a Hollywood sale. Playing Stapelli like a fine piano, Thorpe not only shifts suspicion from himself to a third party, but also begins an affair with Stapelli's wife Patricia (Julia Campbell). And how does Thorpe's current girlfriend Kit (played by Macy's real-life spouse Felicity Huffman) figure into all this intrigue? Also known as A Travesty, A Slight Case of Murder made its TNT cable network debut on September 19, 1999.

Critic Reviews for A Slight Case of Murder

Macy, Arkin, Huffman, and Cromwell are clearly having a good time with this amiable little farce noir. Fortunately they're able to transfer much of that fun over to the viewer.

...a comedy-thriller that is really pretty nifty, with a topflight cast by television standards.

Audience Reviews for A Slight Case of Murder

This is Macey at his best in a comedic role. The scripting and dialogue are likewise tops. The play within a play format adds to the fun as Macey addresses the audience while his life falls apart. If you like murder, mayhem, sleazy characters, and smart cops, all wrapped up in a funny movie, you will love this gem.

A Slight Case of Murder Quotes