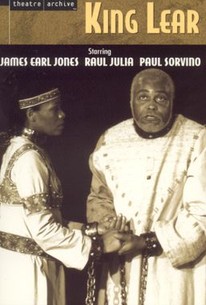 James Earl Jones gave one of his finest performances in the title role of Joseph Papp's acclaimed New York Shakespeare Festival production of the Bard's tragedy, putting a new spin on this classic story of one family's vainglorious battle over the affections and favor of an aging monarch. Jones and the production's original cast re-created their roles for this 1974 television special; the supporting cast includes Raul Julia, Rosiland Cash, Paul Sorvino, René Auberjonois, and Lee Chamberlin.

There are no featured audience reviews yet. Click the link below to see what others say about King Lear!