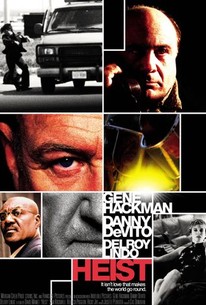 Critics Consensus: Heist didn't cover any new ground, but the cast and Mamet's expertise with witty banter make it worthwhile.

Critics Consensus: Heist didn't cover any new ground, but the cast and Mamet's expertise with witty banter make it worthwhile.

Critic Consensus: Heist didn't cover any new ground, but the cast and Mamet's expertise with witty banter make it worthwhile.

Joe Moore has a beautiful young wife, money owed to him and a job he loves. He's a thief. His job goes sour when he gets caught on security camera tape. His fence, Bergman, reneges on the money he's owed and his wife may be betraying him with the fence's young lieutenant. Moore, his partner Bobby Blane and their utility man, Pinky Pincus, find themselves broke, betrayed and blackmailed. Moore is forced to commit his crew to do Bergman's one last big job. Will Bergman shop Moore to the police? Will Moore's wife trade him in for a younger model? Will Blane and Pincus cut their losses and get out? Who is to be believed, who is to be betrayed? Won't someone who's lied once lie again? Who's going to walk away smiling and who's not going to walk at all?

I couldn't believe any of it on any level, though it could be described as 'fun.'

This cast is excellent. Heist, though, proves that enormously talented people can make a pretty lousy movie.

The movie is super fun, even if some of its tricks seem to strain credulity.

There's something offensive about how Mamet continues to win praise as a serious filmmaker with such a joyless picture, a picture that -- intentionally -- gives the audience so little.

Mamet's cerebral thriller is a joy to watch -- this is easily the director's toughest, grittiest drama to date.

We watch a movie like 'Heist' for the virtuosity of the execution, for the wit with which Mamet writes his way through the conventions, and the pleasure his actors take in chewing on his dialogue, in all of its repetition, shop talk, and artful profanity.

It's one of Mamet's best. It's also one of Hackman's best, most mercurial performances.

[Mamet] is a giant in several areas, but I'm not sure moviemaking is one of them.

This is a world not unlike superhero comics, only in this world the heroes have the superhuman ability to knock down buildings with a split-second comeback line.

A watchable Heist film, but not a particularly exciting one. The plot was full of little twists, but most of them predictable and for me this film brought nothing new to films sharing this theme.

It's pure dynamite. Sizzeling and exhilerating. A razor-sharp crime thriller. One of the best and smartest heist films ever made. Snaps and crackels with great suspense and action. awsome twist and turns all the way to the end. Terifficly written and well-crafted. A brilliant cast of actors. Gene Hackman has never been better. A cool, captivating and fantastic performance. Delroy Lindo is teriffic. Danny DeVito is explosive.

Gene Hackman heads up an otherwise lacklustre cast in a heist movie about an ageing thief who is blackmailed into performing one last job. As hackneyed as that synopsis sounds, it doesn't quite sum up just HOW uninspired this all is. The dialogue is cliched and occasionally embarrassing, the plot implausible and lacking in humour, and all of it's so-called twists can be seen lumbering over the horizon from a mile away. Not completely awful, but in the end it's nothing more than 90 minutes of "So what?"