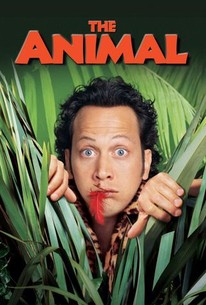 Critics Consensus: While less offensive and more charming than recent gross-humored comedies, The Animal is still rather mediocre.

Critics Consensus: While less offensive and more charming than recent gross-humored comedies, The Animal is still rather mediocre.

Critic Consensus: While less offensive and more charming than recent gross-humored comedies, The Animal is still rather mediocre.

Former Saturday Night Live cast member Rob Schneider stars in this comedy as Marvin Mage, a wimpy nebbish whose lifelong dreams of becoming a police officer are thwarted by his diminutive stature. But when Marvin is critically injured in an auto wreck, deranged scientist Dr. Wilder (Michael Caton) uses various animal body parts to save his life, leaving the patient with the stamina and physical skills of the organ donors. Marvin quickly gains fame as a supercop, but he's also left with all of the embarrassing animal instincts and urges that accompany his new powers -- a serious threat to his blooming romance with new girlfriend Rianna (Colleen Haskell). The Animal co-stars John C. McGinley, Edward Asner, Norm Macdonald, and Cloris Leachman. ~ Karl Williams, Rovi

John Kirk
as Waiter at Party

Critic Reviews for The Animal

If you want a giggle and are not too fussy, you could do much worse than surrendering to its shamelessly puerile brand of smutty schoolboy humour.

Certainly reeks like something produced from a squatting position.

The Animal is never more nor less than stupid, but stupid in ways that deliver goofiness rather than rampant humiliation.

It's just not funny.

No classic but far less offensive than the witless dross like See Spot Run that kids have endured on their time off.

While there's no doubt that The Animal will make you laugh, it's not the kind of laughter that outweighs the missing $10 in your pocket.

It's a great yawning void where Rob Schneider can hump a mail box and attempt to seduce a goat.

There was one thing about The Animal that did surprise me: the extent to which it systematically rips off Wolf.

This could have and should have been a much funnier film.

Audience Reviews for The Animal

The Animal is yet another pointless Rob Schneider comedy that has maybe three actually funny scenes in the entire film. Unfortunately for Schneider, he's a terrible comedian. This film is awful and it's beyond me why this crap got made in the first place. I though that this film was awful, and is one of those comedies that really doesn't stand the test of time. This is the type of comedy film that has poorly constructed jokes and that it really doesn't do anything memorable. The film is just an excuse for Rob Schneider to have a "career" in films. This is so poorly constructed, poorly plotted, yet the idea was pretty interesting. If the script would have been reworked and the jokes better though out, and with a different lead, this might have been a good film. But this film ends up being a big waste of time, and get tiresome after a while. The film rides on one joke practically for the entire length of the film, and it just doesn't cut it. I think that this film should never have been made, and looking back ten years since this crap was made, there have been far better comedies than this. The Animal is one of those comedies that are meant for people who don't want intellectuality to their comedy, it's a mindless one joke film that is so bad, and it can easily be regarded as one of the worst comedies ever made. Even the first two Pauly Shore outings (Encino Man, and Son in Law) brought more laughter than this, and that says something about this train wreck of a film.

I laughed a lot, and that's the best I can say about this. It's sporadically entertaining, but still lacks what most Happy Madison films do; a decent script.

15/10/2010 (TELEVISION) If you are in the mood for some childish humor then look no further, "Animal" just has what you wanna laugh at. I totally laughed right through this back in the days and it was a rather good re-watch. I may not laugh as hard as I did on my initial watch but it's still a rather interesting plot for myself to follow, not original but definitely a fun one. A funny idea and a rather good laugh for me, one that I probably wouldn't mind watching more than once.