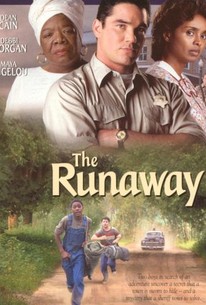 The scene is a small, racially segregated Georgia town in the summer of 1949. After filling their heads with the adventures of Tom Sawyer and Huck Finn, two teenagers -- a black kid named Luke (Cody Newton) and his white pal Sonny (Dwayne McLaughlin) -- embark upon a rafting excursion. Before long, the boys stumble upon the remains of three murdered men. Investigating the mystery, local sheriff Frank Richards (Dean Cain) runs up against a conspiracy of silence that apparently involves everyone in town. Legendary poet Maya Angelou is seen in the role of the enigmatic "Conjure Woman." Based on a novel by Terry Kay and filmed on location in North Carolina, The Runaway made its CBS network bow on December 9, 2000.

Leland L. Jones
as The Reverend

Critic Reviews for The Runaway

There are no critic reviews yet for The Runaway. Keep checking Rotten Tomatoes for updates!

Audience Reviews for The Runaway

There are no featured audience reviews yet. Click the link below to see what others say about The Runaway!