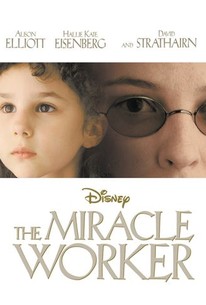 Originally telecast November 12, 2000, on ABC, The Miracle Worker was the third film version of the classic biographical play by William Gibson. Following in the footsteps of Patty Duke and Melissa Gilbert as the young Helen Keller is Hallie Kate Eisenberg, who skyrocketed to TV fame in 2000 as star of a series of well-circulated cola commercials. Alison Elliot co-stars as Annie Sullivan, the dedicated, no-nonsense teacher who ultimately draws the blind, deaf, and mute Helen out of her lonely shell (literally kicking and screaming at times) and into the "normal" world. Filmed in Mississauga, Ontario, The Miracle Worker was shown as a two-hour episode of ABC's The Wonderful World of Disney anthology.

Stephanie Sams
as Martha
View All

Critic Reviews for The Miracle Worker

No matter how tired you may have become of Hallie Kate Eisenberg in those Pepsi commercials, she is a superb young Helen in this Disney production...

Audience Reviews for The Miracle Worker

Amazing movie. Gives hope for people who has disabilities and Helen Keller is one of the most power deft, blind, determine person lived on earth, through her life experience & passion to educate the people around her and shape our history from the past to present.