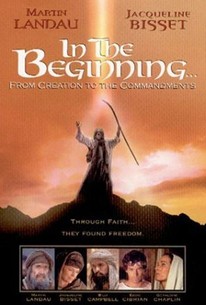 A kind of "best-of" account of the books of Genesis and Exodus, this two-part NBC miniseries aired in November 2000. Part One, set in the desert, covers the stories of Abraham (Martin Landau), Sarah (Jacqueline Bisset), Isaac (Sean Pertwee), Rebeccah (Diana Rigg), Esau (Andrew Grainger), and Jacob (Frederick Weller) and culminates with the enslavement of Joseph (Eddie Cibrian). Part Two, set in biblical Egypt, focuses on the story of Moses (Billy Campbell) and his deliverance of his people from slavery. Also included in the miniseries' huge and illustrious cast are Alan Bates as Jethro, Geraldine Chaplin as Yocheved, and Jonathan Firth as Joshua.

Christopher Lee
as Rameses I

Danny Webb
as Laban
View All

Critic Reviews for In the Beginning

I particularly like Eve and her serpent, but the golden calf is a wowser, too, and a snazzier creation myth is unlikely to be seen outside the Sistine Chapel.

Audience Reviews for In the Beginning

There are no featured audience reviews yet. Click the link below to see what others say about In the Beginning!

In the Beginning Quotes