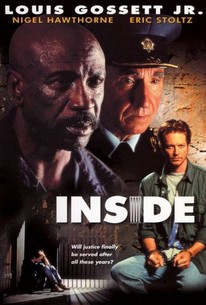 A solemn look at South African apartheid, Arthur Penn's claustrophobic drama centers on a pair of political interrogations, separated by a decade. The film's first part, set in 1988, centers on the imprisonment of Marty Strydom (Eric Stoltz), an Afrikaaner university professor held as a political prisoner under suspicion of conspiring with anti-government forces. His case falls into the hands of the villainous Colonel Kruger (Nigel Hawthorne), a brilliant and evil torturer determined to break the idealistic Strydom's spirit. The conclusion takes place nearly a decade later, after apartheid's fall. Now it is Krueger who is under confinement, and subjected to unrelenting questioning from a black South African (Louis Gossett Jr.) looking to beat Kruger at his own manipulative game. While offering numerous powerful confrontations between its characters, Bima Stagg's screenplay provides few narrative surprises, and some may find the film's limited setting and bare-bones treatments monotonous. However, Penn's stark style suits the harsh subject matter and keeps the focus strongly upon the cast, who provide appropriately intense performances.

Critic Reviews for Inside

Pedantic and preachy, Penn's film tries to be an almost unwatchably horrific picture and succeeds.

Audience Reviews for Inside

Interesting. Not great. Very dragged out. I have seen Eric Stoltz do better.