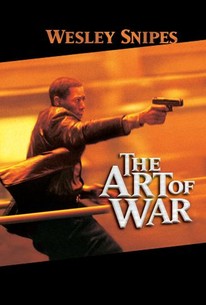 The Art of War Photos

Ruthless terrorists are threatening to bring down the United Nations. They frame the one man they believe can stop them - an international security expert named Shaw. Now he must run from his own allies and become a solitary force for good, as he tries to stop what could become World War III.

Glen Chin
as Ochai
View All

Critic Reviews for The Art of War

In this pretentiously titled international thriller, which is sloppily directed, Wesley Snipes plays an American agent who gets involved in the emerging relations between China and the Western world, with a shaky U.N. placed right in the middle.

The movie is competently made, but it deals with characters and situations so well-worn, there is no conceivable way to breathe any fresh life into them.

The Art of War seems to be processed through some demented kaleidoscope, suggesting a film that might exist while the one that does is giving you a headache.

Two hours' worth of painful stupidity, overt racism, and mind-battering noise and movement.

Overly plotted and too coincidence-ridden for a story that's basically about nothing, this is a film that almost is not there.

Somebody get this director Christian Duguay an A-budget so he'll shut up and go away.

Sun Tzu believed that becoming predictable would lead to disaster. Apparently, the creators of The Art of War couldn't be bothered to take him to heart.

If Wesley Snipes were TWICE as cool as he thinks he is...this movie would still stink.

Wesley Snipes knows how to kick some ass but he really cannot pick a script.

..straining believability factor is Snipes escaping certain death every ten minutes. If you just can't be killed, or even mildly maimed, where's the suspense?

The title alone is a tip-off that the filmmakers feel they are making something much more grand that what actually appears on-screen.

Audience Reviews for The Art of War

it has its moments of fun action but the story is a mess. by the end you'll wish you had chosen something better then this

After watching it AGAIN, I still think everyone treated this movie unfairly. Its not perfect, but I guess this movie did really kickstart the intelligent spy genre, leading to movies like the Bourne Seires and others. i hold this in regard for that fact, also giving a stronger martial arts aspect to the movie and themes like betrayl and politics. Snipes plays a covert UN Agent whose job is to assist the UN on issue which are deemed "necessary" - from espionage to outright blackmail, which is evident in the introduction . I think people kept on saying the plot was confusing and noone understood what was going on. Sorry people, but you're a little silly, you obviously know what "The Art of War" is, and its no mystrey why a movie is titled so. It becomes FULLY clear in the climax when things are explained through some smart dialouge - and the plot was simple really, the method of execution complex, but high effective... the only problem being is Snipes was learning quick that someone was forcing him to chase shadows and false leads and he was the bait. Anyways, if you're wondering why its so confusing, because Snipes' character is supposed to portray confusion and helplesness in being cut off and abandoned, with Chinese gangsters, police and the FBI hot on his heels. If you're confused, good, watch it again and try to put the pieces together like a jigsaw puzzle - every scene, every image has a meaning, it does take some concentration. Though its not 100% perfect, it was a matter of a new style of filming and idea which never really reached the full potential until The Bourne Identity and its successors kicked ass at the box office. It also interesting to see things like new technology back in 2000, like touch screen PDA's and wireless internet which only became consumer friendly in 2005, 5 years from when the movie was released. Anyways, the action is slick, the cast above average, i think Michael Biehn was the standout support. The final fight scene was expllosvie and smoother than your average, something unqiue and obviously set the trend. Anyway, I think a lot of movies afterwards really borrowed something from The Art of War, and I believe a lot of people canned it because of the Snipes name and the fact it was mainly a European production and Indie movie release. Well, if you like movies like this and wanted to see where it all started for the new millenium, this is the one to watch.

Wesley Snipes has never been better, one of his best roles in one of his best action films. A stylish, nail-biting, pulse-pounding twist-a minute action-packed thriller. A sensational and adreniline-pumping action-thrill-ride that kick starts the senses and kicks all sorts of ass. It's sharp, very smart and very entertaining.

I've seen Wesley Snipes in such good form as he appears in this action-thriller movie since Blade.

The Art of War Quotes