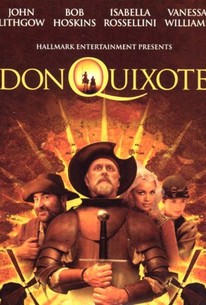 A crusade for decency and truth is mounted by a man gone mad (or has he?) in this made-for-TV adaptation of the classic novel by Miguel de Cervantes. Alonso Quijano decides that it is time to devote his life to battling evil in all its forms; he dubs himself Don Quixote (John Lithgow), obtains a suit of armor, and with the help of his loyal friend and squire Sancho Panza (Bon Hoskins), he sets out to confront the world's ills. Inspired by the lovely Dulcinea (Vanessa Williams) and pursued by a mysterious Duchess (Isabella Rossellini), Quixote fights his battles as he finds them, with Sanson Carrasco (James Purefoy) attempting to find the eccentric old man and send him home before he can do any serious damage to himself or others. Don Quixote was something of a labor of love for John Lithgow, who had been attempting to get a feature film version of the story off the ground for several years. This production received its American premier on the TNT cable television network.

Michael Feast
as Doctor
View All

There is no magic here; creativity was sorely lacking.