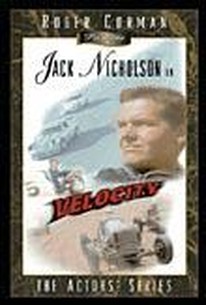 In this producer's cut of The Wild Ride, Jack Nicholson appears in one of his first roles. Featuring hip music, cool slang and classic cars, Velocity tells the story of hot-rodder Johnny (Nicholson), who's angry with his friend Dave (Robert Bean) for abandoning the wild and reckless life they've been leading. As an act of revenge, Johnny kidnaps Dave's girlfriend (Georgianne Carter) and takes her on a high-speed romp -- a course of action he may come to regret.

There are no critic reviews yet for Velocity. Keep checking Rotten Tomatoes for updates!

There are no featured reviews for Velocity at this time.