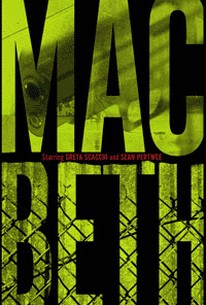 William Shakespeare's famous "Scottish play" gets a new and updated look in this version produced for British television. Macbeth (Sean Pertwee), a brave and bloodthirsty man, has aspirations to political power, and at the urgings of his wife (Greta Scacchi), Macbeth murders Duncan (Philip Madoc) in hopes that this will help ease his way to being crowned King. While Macbeth does win the crown, his gruesome path to leadership comes back to haunt him. Director Michael Bogdanov and producer Sue Pritchard set Shakespeare's historical tragedy against the backdrop of a decaying industrial metropolis, with the characters wearing modern dress that suggests modern-day intrigue among genteel criminals, rather than warring factions in 11th century Scotland. Macbeth was a co-production of the English Shakespeare Company and the British television network Channel 4.

There are no critic reviews yet for Macbeth. Keep checking Rotten Tomatoes for updates!

There are no featured reviews for Macbeth at this time.