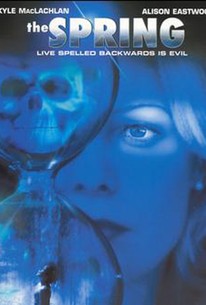 While on a vacation in the Pacific Northwest, widower Nick Conway (Kyle McLachlan) and his son Dennis (Joseph Cross) are involved in a car accident. Dennis is rushed to the hospital in a strange, remote village called Springdale, where all the residents seem unusually youthful and attractive. As he slowly falls in love with the nurse caring for Dennis, Nick comes to the realization that the town harbors a secret fountain of youth--and that there is ultimately a terrible price to pay for being eternally young. Based on a novel by Clifford Irving, The Spring aired January 16, 2000 on NBC, reportedly as the pilot for a never-produced weekly series.

John B. Destry
as Joe Tichenor

Critic Reviews for The Spring

There are no critic reviews yet for The Spring. Keep checking Rotten Tomatoes for updates!

Audience Reviews for The Spring

There are no featured audience reviews yet. Click the link below to see what others say about The Spring!