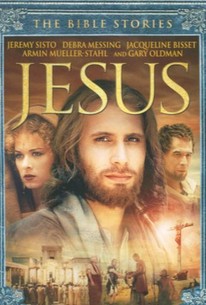 He was a poor carpenter who never traveled further than 50 miles from his home and died at the age of 33, but his teachings changed the world and he's still followed by hundreds of millions of people around the world, 2,000 years after his death. Jesus, originally produced as a television mini-series, offers a glimpse of the human side of the messiah, as well as recounting the story of his life and martyrdom. Jeremy Sisto stars as Jesus, with Jacqueline Bisset as Mary, Armin Mueller-Stahl as Joseph, Gary Oldman as Pontius Pilate, and Debra Messing as Mary Magdalene. The home video release is expanded from the broadcast edition, featuring material that was cut for time purposes.

Stefania Rocca
as Mary Of Bethany

David O'Hara
as John The Baptist

There are no critic reviews yet for Jesus. Keep checking Rotten Tomatoes for updates!

There are no featured audience reviews yet. Click the link below to see what others say about Jesus!