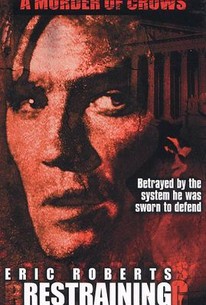 A lawyer is involved in a criminal proceeding he can't argue his way out of in this action-packed drama. Robert Woodfield (Eric Roberts) is a lawyer who grew up walking a tightrope between both sides of the law; after the death of his parents, he was raised by Charlie Mason (Dean Stockwell), a union representative who wants to do the right thing for his men, but who also has one foot in organized crime. Woodfield finds himself defending Martin Ritter (Hannes Jaenicke), who has been accused of murder, and even though Ritter is guilty, Woodfield is not only able to bring in an innocent verdict, but is able to persuade a judge to issue a restraining order that would prevent police from harassing him. But soon Woodfield discovers that he's succeeded too well in court; he witnesses Ritter committing another murder, finding himself caught up in a dizzying and dangerous web of blackmail, deception, and corruption.

There are no critic reviews yet for Restraining Order. Keep checking Rotten Tomatoes for updates!

There are no featured reviews for Restraining Order at this time.